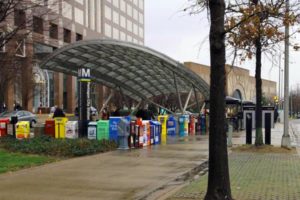 On Saturday, the Arlington County Board is expected to approve a contract to begin preliminary engineering for a new elevator at the Pentagon City Metro station.

With about 36,000 combined entries and exits per weekday, the Pentagon City station is the second busiest station in Northern Virginia — second only to Rosslyn — and the 10th busiest in the entire Metro system.

A study conducted by WMATA in 2010, at the request of Arlington County, concluded that a new elevator should be built on the west side of S. Hayes Street, near the Pentagon City mall, and across from an existing elevator on the east side of Hayes.

In a report, county staff says a second elevator will help improve access to the station for those with disabilities and for those with strollers and luggage, by eliminating the need to cross S. Hayes Street in order to use an elevator.

“Additionally, it will provide redundancy, in accordance with current WMATA design criteria, when one of the elevators is out of service for any reason,” staff added.

The contract for the initial engineering is worth $358,359, and is scheduled to be voted upon by the Board on Saturday. Once the preliminary engineering is completed, the county plans to proceed with a design-build construction process in order to save time and money.