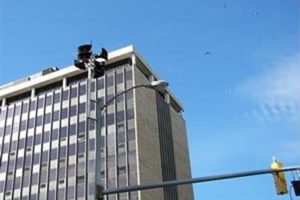 The county conducts an audible test of the warning system once or twice per year, according to Arlington Office of Emergency Management (OEM) Director Jack Brown. Residents in some of Arlington’s more urban areas would have heard a beep or series of beeps during the test, he said.

Arlington’s outdoor warning system was first installed in 2007, using $400,000 in funding from the Department of Homeland Security. The system includes six warning speakers: two in Rosslyn, one in Clarendon, one in Courthouse, and two in Pentagon City. The speakers are controlled by a line-of-sight radio signal.

According to Brown, he last time the speakers were used in an actual emergency was on July 4, 2007, when a severe storm was approaching the area while thousands were heading to sites like the Iwo Jima memorial for the Fourth of July fireworks display.

In addition to beeps or a siren, the speakers can broadcast a pre-recorded voice message. It’s the same type of system that’s used on military bases like Joint Base Myer-Henderson Hall, Brown said. While Fort Myer’s speakers play Taps at night and perform other non-emergency functions, however, the county’s system is only meant to be activated for true emergencies, like severe weather events, terrorist attacks, or other incidents.

Brown acknowledged that the system is only in earshot of those who are in some of the county’s more densely-populated areas, but said that it’s only one piece in a multi-platform emergency alert system that includes the county’s 1700 AM radio station, Arlington Alert emails, social media channels, a Reverse 911 system, and local media outreach.