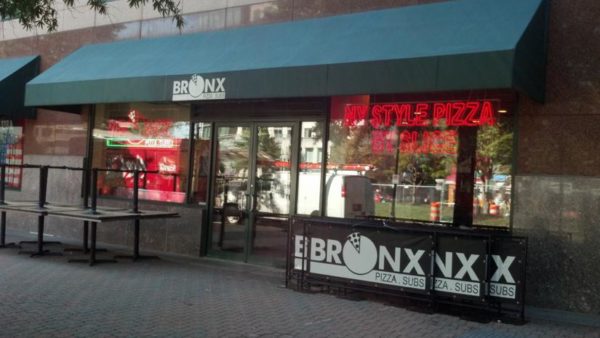 After some delays caused by permitting issues, the owners of Bronx Pizza in Clarendon are hoping to open next week.

Owner Mike Cordero tells ARLnow.com that he expects to open the pizzeria on Wednesday, Aug. 22.

Located at 3100 Clarendon Boulevard, Bronx Pizza is intended to be an Arlington version of a neighborhood pizza joint like the one Cordero started working at in the South Bronx at the age of 13. Cordero says the closest thing to Bronx Pizza in Arlington right now is the Italian Store (3123 Lee Highway). What Bronx Pizza lacks in Italian groceries, however, it makes up for in decorations — including photos on the wall of Mickey Mantle, Tony Soprano, the Rat Pack and New York City’s George Washington Bridge.

Bronx Pizza is located in a relatively small space, but includes a few tables for indoor seating.