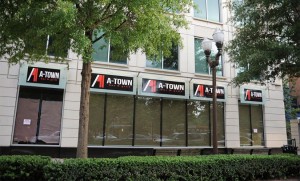 First up is A-Town Bar & Grill, the renovated successor to Caribbean Breeze in Ballston (4100 Fairfax Drive). Cordero says the restaurant will likely start serving customers this coming Wednesday as part of a quiet “soft opening,” but will hold its official opening on Friday, Aug. 10.

A-Town will feature an expanded beer list; an “eclectic” menu including sushi, sandwich creations, flatbread pizzas and steaks; a redone outdoor patio; a birchwood bar; historic photos of Arlington on the walls; and lots of flat screen TVs.

Cordero says former Caribbean Breeze patrons “are not going to recognize the restaurant” when they walk in. He acknowledged that he’s taking a risk by replacing the successful Caribbean Breeze, but insists “the odds are in our favor to succeed here and increase our sales.”

“One of the reasons we switched from Caribbean Breeze to A-Town is that Caribbean Breeze was more of a specialty operation,” he told ARLnow.com. “I figured we could support the locals and cater to Arlington, not just to Miami… It will be a place you could eat at every day.”

Bronx Pizza (3100 Clarendon Blvd), which has been “coming soon” to Clarendon since February 2011, , according to Cordero.

Cordero, who grew up in the South Bronx and started working in a mom-and-pop pizza place at the age of 13, says the opening will feature something unique to Arlington: actual Bronx pizza makers.

“Old friends of mine who have been in the pizzeria business for 20 years, they’re going to come down and help [with the opening],” he said. “The reason we call it Bronx Pizza is I am from the Bronx, two blocks from Yankee stadium.”

In addition to bona fide Bronx natives, the shop will feature plenty of other touches from the northernmost New York City borough, including photos of the Mickey Mantle, Babe Ruth, Michael Corleone (from the filming of The Godfather), and the George Washington Bridge.

Cordero is expecting late night food to be a big component of the shop’s business.

Interior construction on both restaurants is expected to wrap up by Monday.