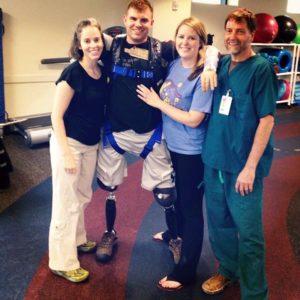 A 5K race in Shirlington next month will benefit an Army staff sergeant who lost all four limbs to an IED in Afghanistan earlier this year.

Registration for individuals is $35, while registration for a family of four is $80. Half of the proceeds will benefit the Travis Mills Fund. Sgt. Mills was the fourth quadruple amputee from the wars in Iraq and Afghanistan to survive his injuries. A father and husband, Mills has been living at Walter Reed Army Medical Center, where he has been learning to walk on a new set of prosthetic legs.

Mills, a Michigan native, appeared on TV last month and discussed his road to recovery and his optimistic outlook on life. The Mills Fund helps his family pay travel and living expenses that aren’t covered by insurance or the military. The race aims to raise a total of $5,000.

A post-race party will be held at The Bungalow Sports Grill in Shirlington (2766 South Arlington Mill Drive).

END_OF_DOCUMENT_TOKEN_TO_BE_REPLACED

More Stories
Ballston Office Building to Be Vacated, RenovatedLook Back: One Year After the Earthquake