Around lunchtime on Friday, Aug. 24, five Arlington County police officers, including three undercover officers in plainclothes, were assigned to enforce mobile vending regulations along the county’s Metro corridors. By the time lunchgoers had returned to their offices, police had issued seven court summonses to four different food trucks for a variety of violations.

The operation was one of two such coordinated enforcement actions against food trucks this summer — operations that have become necessary due to repeated violations, according to police.

As the number of food trucks in Arlington continues to rise, complaints against improperly licensed or illegally parked food trucks have risen — with many of those complaints coming from the brick and mortar restaurants that compete with food trucks for customers. In response, Arlington County Police say they came up with a plan of action earlier this year that included a vendor education campaign.

“[Police] determined that based on the number of complaints, we needed to at least assess the situation,” Arlington County Police second district commander Capt. Andy Penn told ARLnow.com. “We looked to see what was going on and noted that there were some violations were occurring. [We] then got together and decided that the best approach is going to be an educational campaign, certainly in the beginning, just trying to make sure people are informed and seek compliance.”

Penn said police met with vendors, inspected vending licenses, and handed out a small booklet listing relevant county ordinances. They also distributed a one-page handout of the most commonly-violated mobile food vending rules, including requirements for each vendor and employee to be licensed and — the perhaps most controversial rule — that food trucks can only remain parked in one spot for 60 minutes at a time. Finally, officers issued warnings when vendors were not in compliance, Penn said.

With the warnings distributed and the violations continuing, police began enforcement, issuing summonses that require the vendors to appear in court, in person, and pay a fine.

“The goal was not to give anybody a summons until they’ve been warned at least one time, if not more,” Penn said. “To my knowledge, the people charged have been previously warned.” 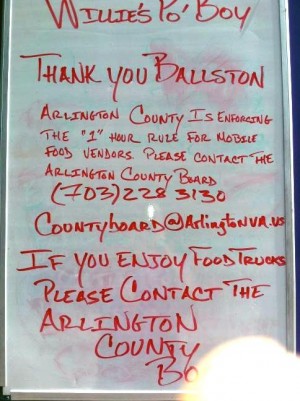 The plainclothes officers were only detailed to the district team on Aug. 24 for a “limited amount of time,” Penn noted, and were in plainclothes “for a different issue.”

“The initial intent for the plainclothes had nothing to do with vendors,” he said. “They just happened to be in plainclothes that day.”

Food truck operators, meanwhile, have been voicing their discontent, calling the rules — in place since 2010 — “unfair,” and suggesting the fines and required court appearances are heavy-handed.

“Law enforcement has stepped up efforts in major areas like Crystal Drive, N. Lynn Street and N, Stuart Street in Ballston to enforce the rule,” Bada Bing food truck owner Nicholas Terzella told ARLnow.com via email on Aug. 24. “Police have been staking trucks out. When I was parked in Crystal City a few weeks ago, an Arlington County police officer sat across from Chic fil A for over an hour. In this time, multiple cars pulled up to 2200 Crystal Drive and double parked (this happens daily). None of these cars are EVER ticketed. The officer sat there for 1.5 hours and ticketed us.”

“This is the first time in my 2 years of business that I have ever received a ticket,” he continued. “I admit, parking in those particular locations is AWFUL!! That’s why we can’t just leave after the 60 minutes and just grab another spot. This rule ends our lunch service early and makes staying in Arlington impossible. We have to change it now or Arlington will soon be a food truck wasteland.”

Trucks owners have been taking their case to the County Board and to Arlington Economic Development, and Terzella said there’s discussion that the 60 minute rule might be changed next year.

In the meantime, he said that the Bada Bing, Seoul Food and Sinplicity trucks have collectively received at least four summonses, while the Lemongrass and Willie’s Po Boy trucks have been forced to move. He said the fine and court fee for the summonses is $106, but the fact that many truck owners have to take their truck off the street for a day in order to appear in court is even more damaging.

“Food truck owners and food trucks are a reflection of our great country,” said Terzella, a former high end restaurant chef. “Different cuisines, different styles different backgrounds… all doing what we have to do in a struggling economy. Small businesses like food trucks are whats going to help pull the economy out of this mess. Why are we being penalized for running our business the only way possible?”

“Restaurants are asking for protection,” he added. “All trucks want is our freedom!”