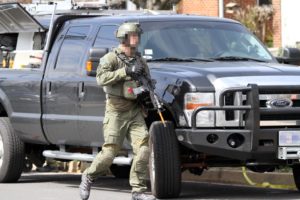 The FBI is conducting a training exercise on the 4400 block of 16th Street N., in Waverly Hills, until about 4:00 p.m., according to an Arlington Alert.

The exercise inadvertently drew a large police response to the area when a 911 caller reported seeing a man dressed in camouflage with an assault rifle strapped to his back near Glebe Elementary School. Police searched the area and eventually discovered the training exercise, according to scanner traffic.

This is the third such FBI training exercise in Waverly Hills in the past year and a half.