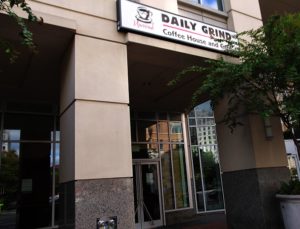 A new restaurant is getting ready to move in at 4300 Wilson Blvd in Ballston.

Which Wich is preparing to move into the neighborhood, apparently into the space previously occupied by the recently closed Daily Grind.

The chain touts more than 50 customizable sub sandwiches, including a few breakfast options, as well as salads and shakes. The restaurants highlight their unique way of ordering, in which customers use markers to write their orders on brown paper bags, and the sandwiches are delivered to them in those bags.

The Ballston location will be the third in Virginia. A company representative said it’s too early to know an exact opening date, but the goal is early in 2013.