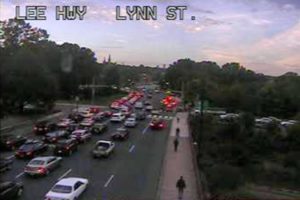 It wasn’t a great morning to drive or bike on N. Lynn Street in Rosslyn.

A cyclist was struck by a vehicle at the dangerous intersection of Lynn Street and Lee Highway around 8:15 this morning. The cyclist was treated for a reported knee injury and transported to the hospital.

Although emergency activity from the accident blocked a right-hand lane of Lynn Street, the bigger traffic problem was the ramp to the northbound GW Parkway. According to scanner traffic, ongoing rock stabilization work on the parkway — which has blocked a left-hand lane — is causing traffic on the parkway to slow and, in turn, is causing major delays for traffic merging on to the parkway from Rosslyn.

As of 8:30 a.m., cars heading to the parkway were backed up all the way to Wilson Blvd on Lynn Street.