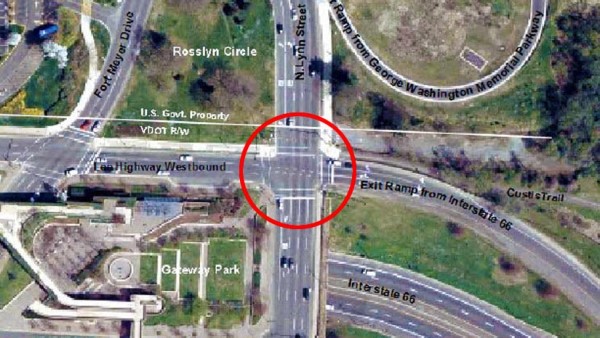 (Updated at 3:15 p.m.) A cyclist who was struck at the dangerous intersection of Lynn Street and Lee Highway in Rosslyn is recounting her accident with the hopes that it will convince transportation authorities to speed up safety improvements planned for 2013/2014.

I was riding south along N Lynn (sidewalk/bike trail) as I approached the intersection with Lee Highway (NE corner of intersection). I checked to see that I had the walk signal, which I did, and that the cars on Lee Highway had the red light, which they did. The cars were stopped at the red light. As I crossed Lee in the crosswalk, someone tried to turn right on red and drove straight into me, knocking me off my bike and onto Lynn (where traffic was proceeding).

My injuries aren’t severe, but I’m still undergoing medical treatment. My bike needs to be fixed as it currently can’t be ridden, but I feel very lucky to have made it through that intersection alive!

I suppose it’s good that Arlington is planning to make the intersection safer, but 2 or 3 years is ridiculous. There should be no turning on red, or a dedicated turning arrow at a time when pedestrians do not have the walk signal.

Drivers really just do not look for bikers or pedestrians, so even if you’re following the laws and traffic signals as I was, you can still get hit.

The Arlington Bicycle Advisory Committee is planning a “site visit” with county staff at the intersection on Monday, Sept. 12. The meeting, which is open to all who want to attend, will start at 6:30 p.m. and will discuss ways to make the intersection safer for cyclists and pedestrians.