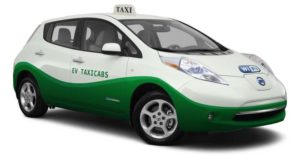 If the Arlington County Board goes along with a new set of recommendations from County Manager Barbara Donnellan, Arlington could soon be served by a fleet of 40 all-electric cabs equipped with 4G WiFi hotspots and iPads for passenger use.

As part of this year’s taxicab certificate allocation process, Donnellan is recommending that a total of 65 additional taxis be added to the county’s existing licensed fleet of 765 cabs. Among the companies receiving a recommended allocation from Donnellan is an Arlington-based upstart, EV Taxicabs. 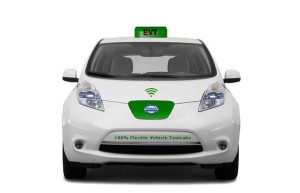 The company is set to get permits to operate 40 cabs in Arlington under Donnellan’s recommendation. According to EV Taxicabs’ website and Facebook page, the cabs will be all-electric Nissan Leafs, a five-door hatchback that gets the equivalent of 99 miles per gallon.

In addition to being all-electric, the cabs will be equipped with a high-speed 4G WiFi hotspot and an Apple iPad, both for passenger use. The cabs will be dispatched using what’s described as a “state-of-the-art cloud-based dispatch solution… running on Samsung Galaxy 7 tablet.” Passengers will be able to book the cabs via smart phone or the company’s website.

In addition to the cabs, the company has pledged to install more than 50 electric vehicle chargers around Arlington.

Donnellan writes that based on a scale that considers various factors — including environmental impact, customer service, business feasibility and employee treatment — EV Taxicabs received the highest rating of any cab applicant. (Ten companies applied this year.)

Based on the rating system, EV Taxicab was rated the highest of all applicants. It will be installing a number of quick charge stations throughout the County that will be available to the general public as well as their drivers. This will encourage additional usage of zero emission vehicles, helping Arlington County to be a pioneer in this new technology.

The EV Taxicab applicant is a current Arlington County taxi driver. He is bringing his experience and wants to address and cooperate with County staff to improve the drivers’ profession. He proposes to provide training, two week annual vacation, health and fitness club membership, financial management training, customer service training, assistance with legal representation and is looking into providing life insurance for drivers. The EV Taxicab application impressed County staff through its use of technology and its apparent commitment to fair treatment for its drivers.

EV Taxicabs is not the only non-traditional cab company set to benefit from Donnellan’s recommendation. The “carbon-negative” EnviroCab company is set to receive 10 additional cab allocations. Separately, the company recently announced plans to add one all-electric Nissan Leaf to its current fleet of 49 hybrids.

Under the County Manager’s recommendations, Friendly Cab, Blue Top Cab and Red Top Cab will each be allowed to add five additional taxis to their fleet. The recommendations specify that Blue Top and Red Top are to add only wheelchair-accessible vehicles.

Donnellan’s recommendations will be considered by the County Board at its Nov. 17 meeting.