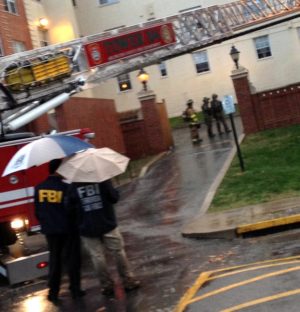 Arlington County Police, the county bomb squad and FBI agents are on the scene at the Woodbury Park Apartments, on the 2200 block of 11th Street N. near Clarendon, searching the apartment of Leon A. Traille, Jr.

Video of the search, courtesy of Fox 5, can be found below. So far, there’s no indication that the apartment building has been evacuated, but the investigators are still on the scene. Bomb technicians entered the apartment via the window.

Traille is facing a federal arson charge after police say he tried to fire bomb the Ballston Common Mall food court. He was arrested several hours later while eating lunch at Courthouse Plaza.