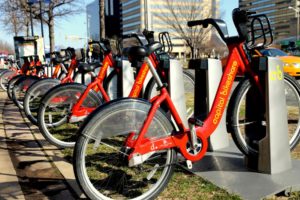 Capital Bikeshare is back in business following Superstorm Sandy, but cyclists are warned that hazardous conditions remain on the streets and trails.

Capital Bikeshare did not experience damage to any of its bicycles or docking stations, we’re told. The system did shut down for about 36 hours to prevent people from biking in dangerous conditions, and to protect the workers who have to travel around the metro area to re-distribute bikes where they’re needed.

The system began running again on Tuesday afternoon, and workers spent some time playing catch up on bike re-distribution.

Although larger obstacles such as fallen trees or downed wires still pose a problem for cyclists, BikeArlington’s Chris Eatough said such hazards are relatively easy to spot and shouldn’t take too many people by surprise. The lingering issue that might catch cyclists off guard is wet ground covered with slick leaves.

“The main thing we’ve heard and that I’ve noticed is slippery conditions. A lot of leaves came down along with everything else. They’ve come down so heavily saturated that in many cases they’re matted to the trails and roads,” Eatough said. “It’s definitely something to watch out for. That could take you off your bike before you even know what’s going on.”

Cyclists are reminded to control their speeds and use extra caution when turning. As always, cyclists should use a light when traveling in the dark. Eatough said the light is particularly important to have as darkness sets in earlier, especially with daylight saving time beginning on Sunday (November 4).

Cyclists looking for the latest biking conditions, including those on the trails, can check in online with the Washington Area Bike Forum or follow BikeArlington’s Twitter feed.