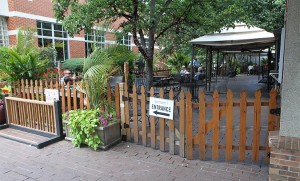 The Arlington County Board is scheduled to consider an expansion of amplified music at the Westover Market beer garden (5863 Washington Blvd).

Only one neighbor has complained to the county about the amplified music, according to the staff report.

“No formal complaints have been made to the Zoning or Code Enforcement Offices since amplified entertainment was started one night per week in June 2012,” staff noted. “Staff has received informal complaints and concerns by one neighborhood resident. However, the applicant has been found upon investigation by staff to be compliant with the Noise Ordinance, and compliant with all conditions of approval.”

Westover Market also requested permission to operate the beer garden year-round, but staff concluded that such a move would require a change in the Zoning Ordinance. The ordinance requires all outdoor cafes in the county to be “seasonal” in nature — typically open from April to November and closed in the winter.

The Board is expected to consider the amplified music request at its meeting this coming Saturday, Nov. 17.