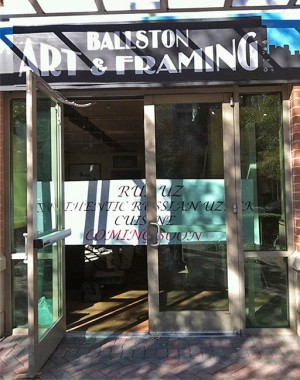 Rus Uz hopes to open later this month or early December, co-owner Igrokhim Rakhmatullaev tells ARLnow.com. The eatery will seat about 36 people inside and 20 people outside on the seasonal sidewalk cafe, he said. It will serve authentic Russian-Uzbek cuisine like plov, a rice dish, and borscht, a beetroot-based soup, as well as Russian wine and beer.

The business will be moving from Alexandria, where it exists as a catering company. Rus Uz will be primarily a restaurant, but will continue to do catering on the side. The company has catered for the Hillwood museum, the World Bank and for numerous weddings, said Rakhmatullaev.

The catering business has been “very successful,” according to Rakhmatullaev, leading him and his partners to the decision to open the restaurant. Other than Russia House, a restaurant and lounge near Dupont Circle in D.C., no other restaurant in the area specializes Russian-Uzbek cuisine, he said.

Rakhmatullaev said he hopes that the restaurant attracts members of the local Russian and Uzbek communities, as well as diners looking to expand their culinary horizons.

“I’m assuming people would like to try something different, something new,” he said.

The interior of the restaurant will feature traditional Russian decorations, Rakhmatullaev said. In the kitchen will be head chef and co-owner Bakhitiyor Rakhmatulleav, who has cooked for visiting heads of state at local embassies, according to Rakhmatullaev.