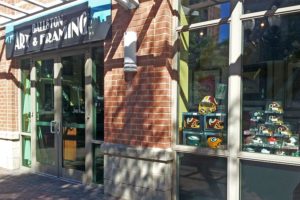 The store, which is hoping to open at some point this week, will sell artwork and offer framing services. A banner announcing the store is now covering the existing Daily Deli sign. Artwork and sports memorabilia can be seen in the window.

Ballston Art and Framing has the same ownership as K.H. Art and Framing at 4745 Lee Highway, according to building permits. A store rep tells us that the new store is the business’ fifth location; other locations include Falls Church, Lorton and Washington, D.C.