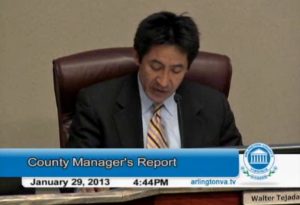 A sewage backup that flooded an Arlington Harris Teeter store last May is still causing a stink in the backrooms of county government.

The Harris Teeter at 3600 S. Glebe Road, near Potomac Yard, remains closed with no reopening date in sight. The grocery store was flooded with raw sewage on May 11, 2012, due to a clog at the nearby Arlington County Water Pollution Control Plan.

Earlier this month, Arlington County spokeswoman Mary Curtius told ARLnow.com that “no civil lawsuits have been filed” against the county as a result of the sewage incident. But at its Tuesday meeting the County Board adjourned to closed session to discuss, as County Board Chair Walter Tejada put it, “two matters requiring consultation with the County Attorney and staff concerning pending claims made by Harris Teeter and others, arising from an incident on May 11, 2012.”

It’s unclear what “claims” are being made. Asked about the behind-closed-doors session, Curtius declined further comment.

Harris Teeter says they’re “actively working with both the county and our landlord to discuss solutions to make sure that which happened does not happen again,” but a company rep declined to give additional specifics.

The closed session was not the only hush-hush County Board action to take place on Tuesday. The Washington Post reports that the Board unanimously approved 5 to 10 percent raises for three top county officials at the end of the public meeting. The raises come as the county faces a $25 to 50 million budget gap for the upcoming fiscal year.

END_OF_DOCUMENT_TOKEN_TO_BE_REPLACED

More Stories
ACPD: No Charges to Be Filed Against Patrick MoranThe Right Note: Verify Then Trust