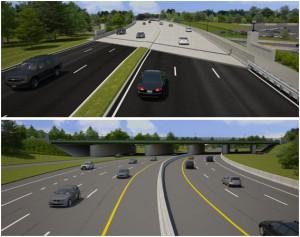 VDOT is planning to “modify and repair” the aging Washington Boulevard (Route 27) bridge over Route 110, near the Pentagon, and will be holding a public hearing to discuss its plan.

The hearing will be held from 6:30 to 7:30 p.m. on Wednesday, Feb. 13 at the VDOT Arlington headquarters at 1426 Columbia Pike. The project manager, Edwin Woo, is also soliciting comments via email for the next three weeks.

The bridge, which was built in 1941 and carries 3 lanes of traffic in each direction, is structurally deficient, according to VDOT. The replacement will be widened by 9 feet, to 105 feet, to accommodate an 14-foot shared use path and an 8-foot sidewalk on either side of the bridge — an improvement over the existing, narrow concrete sidewalks.

The bridge will also be lengthened, to 485 feet, and will also allow a slightly higher clearance: 16 feet 6 inches compared to 15 feet 4 inches. It will still carry three vehicle travel lanes in each direction.

Construction on the $20 million project is tentatively expected to start in 2014 and wrap up in 2015. At least two traffic lanes will be maintained on Washington Boulevard and Route 110 during the duration of the project, with the exception of some temporary nighttime closures, according to VDOT.