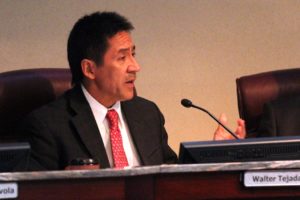 Arlington County Board Chairman Walter Tejada has suggested that he’s open to a discussion about imposing a local income tax and using it to fund transportation projects, the Washington Post reports.

A bill that would allow Arlington and other Virginia localities to impose a 1 percent income tax without a voter referendum passed the Virginia state Senate last week. It’s now under consideration in the House of Delegates, although most tax bills face an uphill battle in the Republican-majority body.

(Arlington, Alexandria, Fairfax County and other jurisdictions are currently authorized to impose a 0.25 to 1 percent income tax, but must first have it approved by voters.)

Tejada told the Post’s Tom Jackman that the Board is following the bill “intently.”

“We’re always trying to find ways to fund transportation projects, and considering we were ranked number one in gridlock, any resources would be helpful,” Tejada said. “We’ve been trying different things, and traffic’s not going anywhere.”