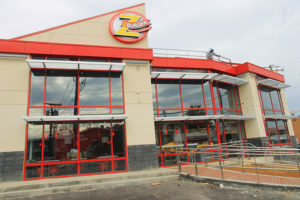 There have been some delays in opening, but the finishing touches are now being worked on at the new Z-Burger at the corner of Wilson Blvd and N. Kenmore Street, between the Clarendon and Virginia Square Metro stations.

After nearly two years of construction, owner Peter Tabibian hopes to open the restaurant in the next two to three weeks. He said an inspector asked for a few more fixes before the final occupancy permit is granted. Tabibian thinks the timing should be better with a March opening anyway, considering it may not be as cold outside.

“I think it’s better to open when it’s a little bit warmer,” he said. “When you open, you want to open with a big bang. It’s not as good when it’s winter.”

Although there are a number of Z-Burger locations throughout the D.C. metro area, this will be the first in Virginia.

“Arlington is a very good place for businesses because it has the right demographics and what we were looking for,” said Tabibian. “They’re building a lot of stuff here and I think this will be a good place for our first Virginia location.”

Z-Burger touts homemade custard in its 75 varieties of milkshakes, freshly cut fries and onion rings, fresh bread that’s delivered twice daily and even cheesesteak sandwiches. Tabibian said the burgers are different than at other restaurants due in a large part to the special spice blend, which he says “is very addicting.” He believes another aspect that sets Z-Burger apart from competitors is the service.

“We are very quick. We have a system that as soon as people come in, the patties are already dropped down on the grill,” said Tabibian. “Everything is cooked to order so people don’t have to wait a long, long time. By the time you order, our goal is to get your food in six to eight minutes.”

Once it opens, the restaurant will celebrate its grand opening with several days of burger giveaways. Until an opening date is set, crews will continue construction work and Tabibian will continue hiring staff. Anyone interested in applying for a position at the new Z-Burger should email [email protected]