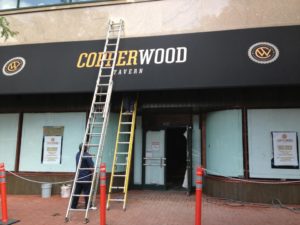 Copperwood Tavern, a new “cabin-style restaurant and bar” in Shirlington, is scheduled to open on Monday, Sept. 30.

The rustic restaurant and its outdoor patio will seat 218 people. The bar will serve 20 draft beers, up to 20 wines by the glass and about 20 American whiskeys. The food menu includes $15-25 lunch entrees, $29-35 dinner entrees and a weekend brunch.

First announced in April, Copperwood Tavern is located at 4021 Campbell Avenue, in the former Bistro Bistro space. It’s owned by the company behind Wilson Tavern in Courthouse and The Mighty Pint and Irish Whiskey in D.C.

More about Copperwood Tavern, from a press release about the opening:

Designed by local artist Maggie O’Neill of O’Neill Studios to feel like your entering the wilderness in southern Virginia, Copperwood Tavern will feature seasonal farm to table menu options, 20 draft beer favorites, craft bar program and inviting atmosphere including front porch dining for you and your pet. Copperwood Tavern is scheduled to open on September 30, 2013.

Copperwood Tavern interior will be a dramatically warm and unique tribute to the best place in everyone’s life: The home away from home. Hunting and fishing accents will be seen throughout the décor, complete with all the charm and texture that comes with places that make you long to hang out longer.

With a “woodsy retreat” atmosphere, Copperwood wouldn’t be complete without the option to bring your loyal hunting companion — patrons will be encouraged to bring their pets along. Copperwood Tavern will feature a 56-person, dog-friendly porch with copper dog bowls and house-baked dog treats.