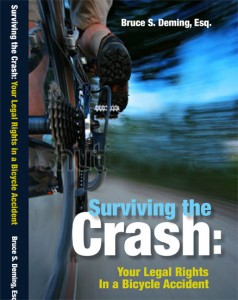 Cyclists’ rights in an accident can be the topic of frequent comment-section debates, but not enough cyclists know what to do after they have been in accident.

That’s what Arlington personal injury lawyer Bruce Deming thinks, and he’s written a book to try to educate the cycling public. Surviving the Crash: Your Legal Rights in a Bicycle Accident is Deming’s attempt to clear up much of the confusion that occurs in most cyclists’ minds after they are involved in an accident.

“There are so many urban myths out there about what your rights are, what do you do in the minutes/hours/days after an accident, who pays your bills, do you need a lawyer?” Deming said. “There are a lot of basic questions that people need answers to, so that’s why I wrote the book.”

Deming, a Lyon Park resident who runs a personal injury law practice in Courthouse, said cyclists in particular should be aware of the “contributory negligence” statute in Virginia, Washington, D.C. and Maryland, three of just five states and cities in the country that have the rule.

“If a cyclist is injured as the result of a motorist’s negligence, and the motorist was 99 percent at fault, but the cyclist was 1 percent negligent, and that negligence contributed to the accident, that cyclist is barred from recovering anything for his or her injuries, no matter how catastrophic,” Deming said. “You really have to be squeaky clean.”

Deming said that throughout the book, he tried to emphasize a theme that if cyclists disobey any traffic laws or ride irresponsibly, they will reinforce negative stereotypes that motorist, insurance adjusters and police officers can have toward them.

“Cyclists are second-class citizens,” said Deming, who has been a competitive cyclist for 30 years and teaches spinning at Gold’s Gym. “They are presumed to be at fault sometimes when they might not be, and that comes in bias and prejudices in the minds of drivers out there. Every time a cyclist behaves recklessly on the road, those biases and prejudices are reinforced.”

Deming’s book is being printed and is expected to hit shelves in the next few weeks, he said. When it does, it will be available in print on Amazon for $11.95 and in e-book form for $7.95. Deming is hosting a book release party on Tuesday, Oct. 22 at Lyon Hall (3100 Washington Blvd) from 6:00 to 8:00 p.m. Those interested in attending, where they will receive free copies of the book, must register to do so.