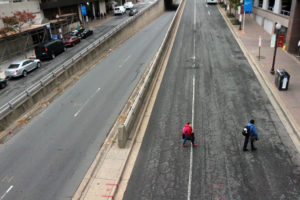 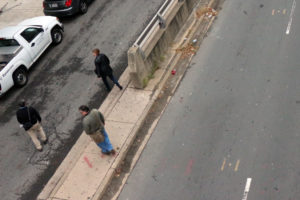 Ft. Myer Drive in Rosslyn has become a hazard for pedestrians due to ongoing construction, but no solutions are on the horizon, according to county staff.

At the County Board’s Tuesday afternoon meeting, Arlington Transportation Bureau Chief Wayne Wentz had no major recommendations for safety upgrades to the heavily-used roadway. The construction that has most adversely affected safety — on the 1812 N. Moore Street skyscraper — is expected to be largely finished by Oct. 31, but the safety concerns will persist.

“We’re never going to be done looking at Ft. Myer Drive,” Wentz said. “We’ve looked a lot at jaywalking. We just can’t find a way to put a crosswalk in there.”

Wentz said county staff is considering installing signs telling residents not to jaywalk in front of the road’s tunnel — a common crossing zone for those entering and exiting from the back entrance of the Rosslyn Metro Station. The county is also in discussion to put up fencing on the sidewalk and in the two small median islands on either side of the tunnel.

“We need to be more proactive in preventing crossing there,” Board Member Mary Hynes said, “given the fact that we have had near-misses and a hit there relatively recently.”

The sidewalk between N. Moore Street and Ft. Myer Drive on 19th Street will remain closed after Oct. 31, Wentz said. The size of Ft. Myer Drive in that area is part of what makes it unfeasible to install a crosswalk. With more than five lanes, the likelihood of a multi-vehicle accident is much greater than on a smaller road.

“We think that there is a chance to reconfigure what Ft. Myer Drive looks like. It could be a two-way street or a narrower street someday,” Wentz said. “There is hope in the future to do something different there, but we don’t recommend it at this time.”