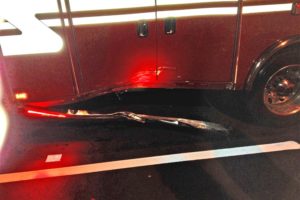 A man has been arrested after allegedly driving into an Arlington medic unit and fleeing the scene.

The incident happened around 11:00 Sunday night. Arlington Medic 109 was exiting a parking lot onto the 2400 block of S. Glebe Road, with lights and sirens blaring and a medical patient on board, when the driver observed a car approaching at a high rate of speed. The ambulance stopped but the driver of the approaching vehicle did not, and the car broadsided the ambulance, according to Arlington County Fire Department spokesman Capt. Bill Shelton.

The driver of the car then fled on foot, Shelton said. He was later apprehended by police and transported to the hospital for treatment of injuries suffered in the crash.

“They were very lucky in that respect,” Shelton told ARLnow.com. “It was a very substantial impact.”

A police spokesman could not be reached to confirm which charges are being filed against the alleged hit-and-run driver. Until repairs can be made, Medic 109 will be replaced by a reserve medic unit from the fire department’s fleet.