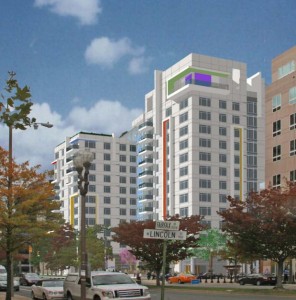 The Arlington County Board approved a new apartment development in Virginia Square at its Saturday meeting.

The Latitude Apartments will be a 12-story apartment building with 265 residential units and 262 underground parking spaces, on the 3600 block of Fairfax Drive. It will feature a 2,800 square foot “cultural and educational space,” 3,100 square feet of retail space, a public plaza and pedestrian walkway, outdoor seating and a water feature.

The project received mixed feedback during the public comment period, with some residents speaking out for it and some against it. Those who opposed it said an office building, not an apartment building, should be built on the site, in keeping with the county’s original land use vision set forth in the 2002 Virginia Square Sector Plan.

Many on the opposition side were residents of nearby condominium buildings, who wore matching badges expressing their opposition. Concerns included added noise, traffic and pedestrian congestion, crowding at the Virginia Square Metro station, visitors parking in residential neighborhoods and other “quality of life issues.”

“My view is that an office building would be the better use,” said resident Anita Wallgren. “I live across the street. By taking action today in a decisive way to deny the applications, you would affirm the sector plan and improve the integrity of the county’s planning process.”

Those supporting the project said the developer, Penrose Group, has been responsive to residents. The development, supporters said, will be a net positive for the neighborhood.

“I love the design of the project from the renderings I’ve seen,” said Judd Ryan, a member of the Ballston-Virginia Square Civic Association. “Throughout this process I’ve struggled to understand the opposition to this project. The [office] vacancy rate is the highest I’ve seen since living in this market. No developer would build office here without a significant pre-lease.”

County staff spent time refuting claims that the apartment building will have a significant impact on crowding at the Virginia Square station. The station is one of the most under-utilized stations in Arlington, staff said, and the new building will only add about one additional passenger per inbound train during the morning rush hour. In keeping with rates seen at similar apartment buildings, about half of residents will end up driving to work, staff estimated.

The Arlington transportation and planning commissions sided with those opposed to the project, recommending against changing zoning for the site. The Arlington Chamber of Commerce weighed in with a letter, supporting the project and the principals of transit-oriented development. In the end, the Board voted 3-2 for the project, with Chris Zimmerman and Mary Hynes casting the dissenting votes.

Zimmerman said the project is attractive on its own, but that’s not justification enough for “throwing overboard a sector plan.”

“Do we disregard long-term plans because of the appeal of an individual project?” he asked. “That for me is the fundamental problem.”

Jay Fisette stated that he doesn’t “want to send a message that the sector plan isn’t important,” but said the county may have to reexamine its expectations for commercial office development given the current high vacancy rate and market changes like the Silver Line to Tysons and the increasing number of employees who work from home or in co-working environments.

“Conditions in the market are changing,” Fisette said. “Adjustments might be necessary in sector plans.”

Libby Garvey said a sector plan is a guiding document but isn’t dogma.

“The plan is a tool but it’s not something that tells us absolutely what to do,” she said. “Otherwise you wouldn’t need a [County] Board.”

Garvey dismissed concerns about noise — “I assume the people in that building are not going to make any more noise than you all in your building” she said — and crowding at the Virginia Square station — “one of the least-used Metro sites.” She said adding additional housing in the Rosslyn-Ballston corridor will help keep housing costs down.

“One of the reasons housing is so expensive here is because there’s not enough of it, there’s unmet demand,” she said.