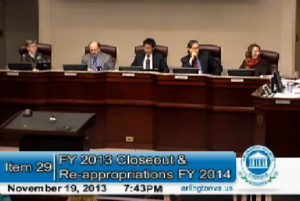 Along with discussing recommendations for the Fiscal Year (FY) 2015 budget, the County Board closed out the FY 2013 budget at its meeting on Tuesday. As it turns out, the county was left with a $25 million budget surplus.

The surplus is due, in part, to savings by both the county and the school system, in addition to higher than anticipated tax revenues. Many of the funds will be re-appropriated to FY 2014.

County Manager Barbara Donnellan gave a presentation to the Board outlining the carried-over funds and recommendations for re-appropriation, noting that several of the funds have dedicated revenue sources which restrict their use.

“With all of the economic uncertainty, the federal government shutdown, sequestration and BRAC, Arlington continues to be fiscally responsible,” said Donnellan. “I am recommending that we add to certain pots to ensure that we are prepared for an uncertain economic environment.”

She added that the county anticipates keeping its triple-A rating.

Carried-over funds were allocated to reserves, previous commitments, and priority projects. Some of the one-time allocations are detailed below:

Donnellan specifically addressed the issue of what to do with Artisphere, which came in over budget for FY 2013. Donnellan had handed down a warning about Artisphere in February but seemed more optimistic on Tuesday.

“This is a facility that came online just as the economic environment was turning. For the arts to be successful, it needs participation from attendees, donors and local or state support. Very few arts facilities like Artisphere can exist without some form of government support,” Donnellan said. “I want the Artisphere to be successful, and I think many others in our community want it to be successful as well.

Donnellan recapped her previous decision to shift half of Artisphere’s funding from ongoing to one-time. She then made a recommendation for the future, highlighting the arts center’s recent increased attendance, better programming and increased revenue from rentals.

“I’m recommending that we use some of the closeout funding to shore up this facility for this fiscal year and next. I told the Board that FY 2014 would be a transition year for Artisphere,” she said. “We’re beginning to see real signs of progress toward our goal of creating an arts and cultural center that will draw thousands of people from our county and across the region into Rosslyn, generating economic and cultural benefits for our entire community.”

Last fall, Donnellan imposed a hiring slowdown to provide expense savings in light of the budget gap faced in FY 2014. The county credits the hiring slowdown with helping departments achieve a higher amount of savings than in previous fiscal years. The slowdown is expected to continue indefinitely in order to achieve savings in FY 2014.

According to the county staff report, three departments did not achieve expenditure savings in FY 2013:

After Donnellan’s presentation, the Board voted unanimously to approve the recommended re-appropriation of funds carried over from FY 2013.