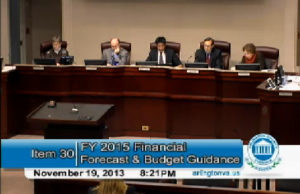 Budget cuts could be coming next year as county officials try to figure out a way to balance the county’s budget without raising taxes.

At its meeting on Tuesday, the Arlington County Board gave direction to County Manager Barbara Donnellan for developing the proposed Fiscal Year (FY) 2015 budget. The Board recommended the County Manager close a projected $20 to $25 million budget gap while maintaining the current tax rates.

Although this is the sixth consecutive year the county expects a gap between revenues and expenditures, Board members note the gap for FY 2015 is not as severe as in recent years. It’s smaller partially due to higher tax revenue projections — mostly from an increase in residential property assessments — but a significant gap still exists.

“It’s not something to ignore,” said Board member Chris Zimmerman. “There may be tough choices that have to be made.”

Board members recommended Donnellan does not increase the tax rate, which currently stands at $1.006 per $100 of assessed value.

“I for one, could not give guidance to the manager today to raise the tax rate, knowing that we project an increase in real estate on homeowners and not on commercial,” say Board member Jay Fisette. “With all of the issues out there that we will have to grapple with, now is not the time to do that, in my view.”

The Board requested continued funding for services that protect residents’ health and safety, investments in affordable housing and environmental sustainability, and adequate support for public schools. That includes funding for an expected increase in school enrollment. Board members spent much time discussing the need to maintain school funding.

Costs are expected to increase for items such as county employee compensation, funding for Metro and debt financing for major capital projects. New costs are expected for projects such as the new homeless shelter, the Long Bridge Park aquatics center and investments in the ConnectArlington fiber network.

The Board members repeatedly pointed out that this is simply an initial recommendation and more input is necessary before Donnellan presents the proposed budget in February.

“This is the very beginning of the budget process,” said County Board Chairman Walter Tejada. “There’s a whole lot more information and data that we will be getting over the next few months.”

Board members acknowledged the potential to discuss additional cuts should the economic climate worsen. Measures could mimic Donnellan’s previous cost cutting measures, such as the county hiring slowdown that began in 2012.

“Our guidance to the Manager begins a months-long conversation with our community that will involve tough decisions,” Tejada said in a subsequent statement. “With the increase in residential property assessments costing many homeowners close to $300 more per year, we have directed the County Manager to assume no tax rate increase; however, we recognize that this is a time of continued financial uncertainty. If the economic environment changes, we expect the Manager to give us options that may include further budget cuts and/or revenue increases.”

The Board approved the guidance by a 4-1 vote, with Libby Garvey offering the opposing vote.