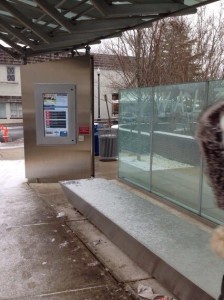 The $1 million Walter Reed “Super Stop” on Columbia Pike had its first big test of handing inclement winter weather over the weekend.

By at least one measure, it failed.

Part of the Super Stop’s bench was covered by snow Sunday, as a tweet from Arlington County Board candidate Peter Fallon showed.