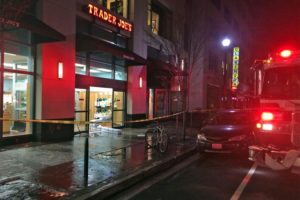 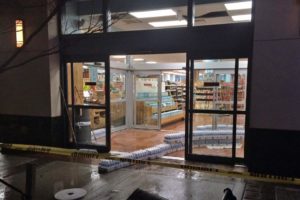 The Clarendon Trader Joe’s store (1109 N. Highland Street) was closed tonight after a water pipe burst near the entrance.

The incident happened between 6:30 and 7:30 p.m. The burst pipe also set off the fire alarm, prompting a response from the Arlington County Fire Department. Water gushed out onto the sidewalk in front of the store and also flooded part of the store.

The water on the sidewalk quickly turned to a sheet of ice. Firefighters cordoned off the area with caution tape to prevent pedestrians from slipping and falling. Employees, meanwhile, could be seen trying to mop up water inside the store.

Trader Joe’s was closed during the clean-up. No word yet on when it will reopen.

Numerous burst pipes have been reported around Arlington today (Tuesday), the apparent result of the frigid temperatures.