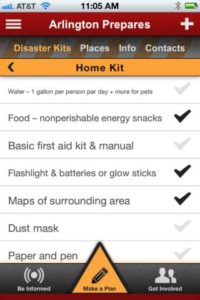 Arlington’s Office of Emergency Management (OEM) encourages residents to make a commitment to being better prepared for emergencies in 2014, perhaps even by making it a new year’s resolution.

OEM highlights the statewide Ready Virginia initiative and asks Arlington residents to join in the campaign by having a plan in case of emergencies.

“I believe we all have a role in emergency management by ensuring that we are prepared, that we have a plan and that we get involved,” said Arlington County Office of Emergency Management Director Jack Brown.

Families should devise an emergency plan and go over it together. All members of the family should understand crucial aspects of the plan such as where to meet if the family is separated. Post the plan in an easily viewed place, such as on the refrigerator. Answer the following questions when coming  up with the plan:

The emergency kit should contain enough of the following items to last for three days:

Home isn’t the only place residents need to be prepared. OEM notes that emergencies can happen at work and in the car, so separate plans should be made for safety in those locations. For example, OEM spokesman John Crawford noted that during the Navy Yard shooting last year, some people were required to “shelter in place.” Many did not have adequate food, water or medications in their work area. In addition to those supplies, Crawford also recommends keeping a small flashlight, batteries and a battery operated cell phone charger at work.

Having emergency contact numbers written on a paper and kept in a purse or wallet can come in handy should a cell phone battery die.

“When the emergency comes, all our contact information is in our cell phones, a majority of phone numbers are there,” said Crawford. “If you lose the ability to get that information and your phone is dead, you can’t access emergency numbers.”

The current cold snap is another example of a situation when preparedness can be beneficial. Drivers should prepare for the possibility of becoming stranded by keeping plenty of gas in their vehicles and keeping cell phones charged. Have extra blankets and snacks in the car as well.

“Winter preparedness may be a little bit different from summer preparedness, but if you’re prepared for one emergency, you’re pretty much prepared for every emergency,” said Crawford. “In the Snowmageddon a couple years ago, people were stranded for hours on the GW Parkway. The lessons we learned from that is that people were not prepared. People needed water and food and they didn’t have it. They needed blankets and didn’t have it.”

One of the important factors about having preparedness plans is to practice them often so they become second nature. Not being well versed in all aspects of the plan could be dangerous in an emergency when stress could cause details to be forgotten.

“If you train enough in anything, and then the disaster comes, you won’t think twice about what you have to do,” Crawford said. “You’ll already know what to do.”

The Arlington Prepares mobile app can be downloaded onto Apple and Android devices. Residents can also sign up for Arlington Alert, which allows the county to contact you during an emergency by sending messages to your email or mobile device.