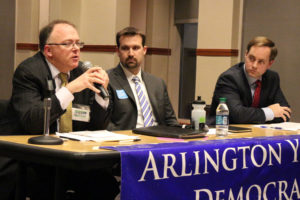 Encouraging young professionals to stay in Arlington and future transit options were prime topics for the three Democratic Arlington County Board candidates during their second debate of the month.

Alan Howze, Cord Thomas and Peter Fallon debated for an hour and a half in front of a standing-room only crowd of Arlington Young Democrats in Ballston Wednesday night. AYD President Max Burns told ARLnow.com that it was the largest crowd at an AYD meeting he could remember.

“We need to focus on a robust BRT system like our neighbors in Fairfax and Alexandria,” Thomas, 31, and a co-founder of EnviroCab, said. “At the end of the day, people just want to get where they’re going. If you can have something that’s state of the art, at one-fifth of the cost, why wouldn’t you choose that?”

Howze — an Arlington native who said he remembers when the Orange and Blue lines were built — said that despite the up-front costs, the streetcar is a sound financial investment.

“If you go back and look at the conversation from 40 years ago, you hear echoes from this debate today,” Howze said. “When you look at the life cycle cost, there’s a strong argument to be made that streetcar is cheaper than buses in the long term.”

Fallon, in addition to speaking out in support of the streetcar, said the county needs more north-south transportation options and says the ART bus’ schedule should be expanded for later service. His primary focus during the debate was on affordable housing; he was touting his record as a planning commissioner in creating more than 1,000 units of designated affordable housing.

“The price of admission to Arlington is very high,” Fallon said. “The people who are here, you end up losing them, unless you’re able to capture them.” 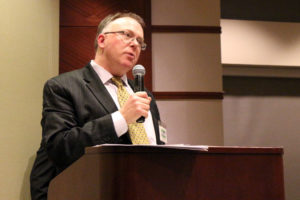 Fallon said he wants to re-examine Arlington’s incentive policies for asking developers for affordable housing units or funding. Fallon believes developers should be asked to contribute more than they already are, saying, “we need to get more bang for our buck so we have more of these units available.”

Moderator Gordon Simonett asked the candidates if they were worried about Arlington’s young population moving to cheaper, neighboring communities like Falls Church and Fairfax. All three candidates answered “yes,” but with varying degrees of concern. Thomas said there’s a reason so many young people are in Arlington in the first place.

“My friends constantly talk about moving somewhere” less expensive, Thomas said, but “Arlington’s a terrific place to be when you’re young.”

“There’s definitely a wonderful sense of young people, entrepreneurs and really young professionals here,” he said. “That’s why when I got here, it was really the place for me. Falls Church might be a little bit cheaper, but it doesn’t have what Arlington has.”

Howze said later in the debate that part of the reason the streetcar was essential was to keep people from moving away once other communities have more transit options.

“The Silver Line is the first significant expansion of the Metro system in decades,” Howze said. “The effects of that reverberates in housing prices and other tradeoffs people need to make to be able to live in Arlington… We shouldn’t, as a region, be backing away from transit as a way to move our community forward, to move people where they need to go and to drive economic growth.”

While Fallon hung his hat on his affordable housing accomplishments, Thomas, who is the co-owner of Ballston-based Elevation Burger, focused his message almost entirely around his business acumen. When asked what his experience in public service was, he replied “investing all of myself into my business.”

“We need to approach businesses differently than we do now,” he said. “We’re not open and welcoming like we talk about. When businesses are choosing to leave, they’re choosing to leave because they feel unwelcome when they first got here. We have a commercial vacancy rate because we are driving people away.” 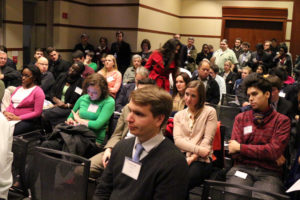 Thomas said the key to providing more social services — which he said he was “raised on” since he was a child — is to grow the tax base by attracting new businesses, not increasing taxes on the ones that are already here.

In his closing statements, Fallon said his focus, besides affordable housing, is on “strong schools, strategic, priority-based investments in our community infrastructure, and fiscal accountability.” Fallon also said he wants to see artificial turf replace all public grass athletic fields in the county to increase field availability.

Howze focused on his diverse experience, from working in the federal government, helping to start businesses and serving in community organizations. Howze is considered the favorite after winning 59 percent of the vote in an unofficial Democratic straw poll.

“I care about Arlington,” he said. “This is a community that I love that has been a part of my life since before I was born. I believe in public service to do good. As you take our measure here today, I encourage you to look at experience in government and leadership.”

Thomas voted for Ron Paul in the 2012 Republican presidential primary and wasn’t active in the local politics scene before this race. He said his focus on his businesses since he moved to Arlington makes him the best candidate despite his relative lack of experience.

“I may be a newcomer to Arlington politics, but I’m not a newcomer to Arlington,” he said in his closing statement. “I may be the only one here who is truly capable of increasing economic development because I’m the only one who has created jobs. We have tremendous people [on the Board] when it comes to affordable housing, tremendous advocates when it comes to schools, but we do not have anyone with real world experience in creating businesses.”

The next Democratic County Board debate will  be held on Saturday from 2:00 to 4:00 p.m. at Campbell Elementary School (737 S. Carlin Springs Road). The Democratic caucus, to select the nominee to fill the seat held by the retiring Chris Zimmerman, will be held on Jan. 30 and Feb. 1.