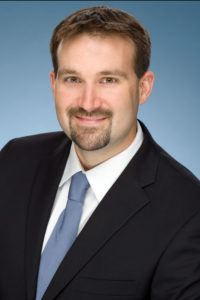 EnviroCab co-founder Cord Thomas announced he was running for the vacant seat on the Arlington County Board at last night’s Arlington County Democratic Committee, declaring a platform of job growth and fiscal responsibility.

Thomas is a newcomer to Arlington politics, having not held a public position before, but after he and his uncle, Hans Hess, sold EnviroCab six months ago, he decided he wanted to do more for the community.

Thomas, a Nauck resident, is also a co-owner of Ballston-based Elevation Burger, which has grown to more than 40 locations worldwide.

Thomas was a surprise inclusion in the group of Democratic candidates vying for the seat made available by Board Member Chris Zimmerman’s impending resignation. Joining Thomas in the race will be Highland Park-Overlee Knolls Civic Association President Alan Howze and former Planning Commissioner Peter Fallon.

Howze’s and Fallon’s candidacies were widely known among local Democrats, to the point where many officials endorsed one or the other at the Democratic committee meeting.

“I was disappointed after I made my speech that so many elected officials had already made an endorsement,” Thomas said. “It seemed rather closed off, almost. I didn’t realize this was happening.”

Thomas, 31, said he plans to represent county constituents he feels are not represented at all on the County Board: small businesses and the county’s largest demographic, 25-34 year olds.

“I have an understanding of what it’s like to buy a home in Arlington these days,” Thomas said; he bought a home in Nauck six months ago. “A lot of small business owners support me in doing this. They really want a voice, and I think that’s important.”

Thomas doesn’t have a stated position on the Columbia Pike streetcar or the Long Bridge Park Aquatics Center, but said that fiscal responsibility must be a priority in deciding on all issues. Thomas said he swims at the Wakefield High School pool, but questioned the size of the investment the county was making with the aquatics center.

“With the streetcar, I’m really waiting for the county to have real numbers,” he said. “I want to see companies come and give us real projections. Until that comes out, I don’t think it would be responsible to make a decision on it. When the information comes out, if it supports economic development like we all think it will, then fantastic. But we need to be responsible here.”

Thomas is concerned with many of the ways the current County Board has allocated its dollars, emphasizing his business experience to show that he could correct the Board’s policies and be, as he put it, “good stewards of taxpayer dollars.”

“In business, every dollar counts,” he said. “However you spend it, you need to make sure you get the bang for your buck out of it. I don’t believe that’s really looked at in the board. In fact, I know that’s not really looked at. I don’t think anybody wants to cut any programs, and neither do I, but we have to learn how to increase our revenue through growth. In order to spend money you have to bring money in.”