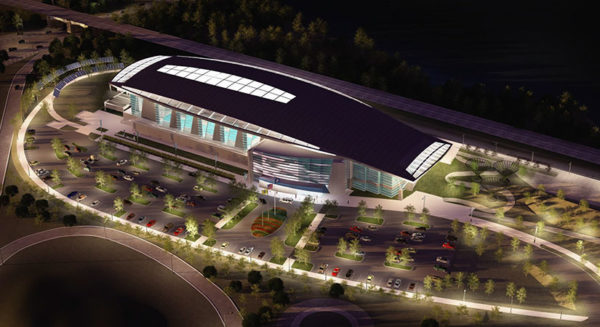 The proposed Long Bridge Park Aquatics, Health and Fitness Facility is on hold due to construction bids that came in “significantly higher” than expected.

Arlington County today revealed just how high the bids were. For a project with a total design, furnishing and construction budget of $79.2 million, the bids for construction alone put the project over budget.

The county wouldn’t specify just how far over budget the construction bids would put the project. From the county statement, which was posted online:

The amounts read aloud at bid opening covered only the construction of the aquatics, health and fitness facility and the surrounding park area. The total cost of Phase II of the project included many other elements in addition to construction. These elements included the costs for design, future costs of furniture, internal equipment and fixtures, technology, security, public art, construction management, third party testing and required permits. County staff will not provide break downs of the costs of these other elements, because to do so would allow a determination of the underlying construction cost estimate. The total project cost (including all of the elements above and the construction costs) was estimated at $79.2 million in the adopted CIP.

Again, although the information read at the bid opening is now public, the estimated costs (the amounts provided in the independent cost or County estimates for the items included in the bid) cannot be made available. Again, the construction costs are only part of the overall project cost. Given that, the earlier statement by the County Manager that the bids received for construction were “significantly higher” than the estimate still stands. County staff cannot and will not confirm or deny the specific amounts of the overage or identify the estimated costs for the other project elements.

County staff is currently analyzing the bids and determining a recommendation for the County Manager to bring to the County Board as to next steps.