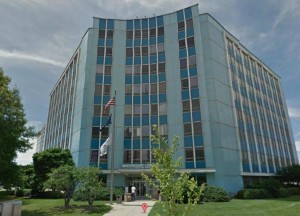 The developer that plans to demolish the “Blue Goose” building in Ballston has agreed to contribute more than $6 million to community improvements for the Ballston area.

The proposed site plan amendment for the project will go before the Arlington County Board at its meeting this Saturday, Jan. 25. The Shooshan Company hopes to bulldoze the distinctive blue building at the corner of Fairfax Drive and N. Glebe Road and replace it with a nine-story office building — to be used to house the Marymount University programs now in the Blue Goose — and a 15-story residential high-rise.

The request for increased density comes with a proposed donation of $1.15 million toward the Ballston beaver pond restoration project and improvements to the Custis Trail, and a $4.57 million contribution to the Ballston Metro west entrance project.

County Planner Samia Byrd said the contributions would connect the Custis Trail to a cycle track that the developer plans to build along Fairfax Drive. The final designs for the improvements “are still under review,” Byrd said, but they could include building a planted buffer between the existing sidewalk and Fairfax Drive and making the sidewalk smoother for pedestrians and cyclists. 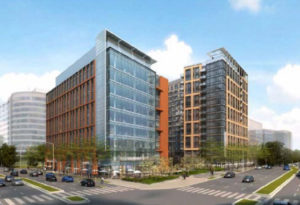 Those improvements would first have to be approved by the Virginia Department of Transportation, but Byrd said they would effectively extend the Custis Trail to N. Glebe Road.

The contribution to the Metro entrance is just one chunk of the proposed $75 million project. The entrance, which is partially designed and planned for the intersection of Fairfax Drive and N. Vermont Street, still has no timeline for construction, according to Byrd.

The Ballston Pond restoration project is already underway. Logs were removed that were holding the water in the pond and it drained completely by November. Construction on Ballston Pond to improve the habitat for wildlife is expected to begin in the spring.

The redevelopment, and demolition of the infamous building, drew criticism from historic preservation group Preservation Arlington, which named it one of the most “Endangered Public Places.” The developer has since agreed to keep some of the blue panels as elements in the new buildings, while others will be donated to local museums.

The “historical attributes” of the 1960s-era building will be “incorporated into the design of the proposed office building and landscaping in the public plaza and courtyard,” according to the county staff report.

Other community benefits proposed in the site plan include a $75,000 public art contribution, a $106,000 utility underground fund contribution, a $567,000 Transportation Demand Management contribution over 30 years, a public plaza and walkway, a $258,000 contribution to the Affordable Housing Investment Fund and LEED Gold certification.

Construction will remove the surface parking lot on the site and, because the office building will be largely used for education purposes, the Shooshan Company has requested a reduced mandatory parking ratio. The residential building includes 3,000 square feet of ground floor retail and 267 units, some of which will be committed affordable housing.