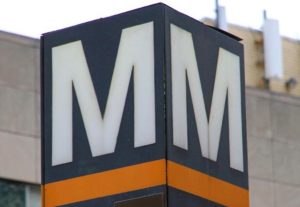 (Updated at 9:45 p.m.) The long-stalled plan to build a western entrance to the Ballston Metro station is taking a small step forward thanks to new transportation funding.

On Tuesday, the Arlington County Board approved a funding plan for the county’s share of revenue generated by Virginia’s new transportation legislation. The plan, which will be submitted to the Northern Virginia Transportation Authority (NVTA), calls for $500,000 to be allocated to planning for the new Metro entrance during the current fiscal year.

The entrance is already partially designed. As proposed, it will be located at the intersection of N. Fairfax and Vermont Streets, allowing easier access to the new developments along Glebe Road in Ballston, the Bluemont neighborhood and other points west. The station will feature two street-level elevators and escalators, connecting to an underground passageway and mezzanine (with an attended kiosk) that will lead to the train platform.

“The County’s goal with the new funding is to advance the design of the West Entrance and proceed to construction,” said Arlington Dept. of Environmental Services spokeswoman Laura G. Smith. “In the next few months, the County will assemble [stakeholders] and reexamine the previous preliminary design.”

In another set of funding priorities submitted to NVTA, for fiscal years 2015-2017, the Board requested $56 million over those three years to cover 75 percent of the estimated $75 million cost of constructing the new entrance. Additional funds for the project are expected to come in the form of a $11 million developer contribution — tied to an approved but thus far unbuilt redevelopment project — and from other local and state sources.

The funding request would suggest that the entrance could be built by 2018, but the construction timeline does not appear to be set in stone.

Also included in the FY 2015-2017 priority list is $10 million for the planned realignment of the eastern end of Columbia Pike, between the Air Force Memorial and the Pentagon. Arlington is hoping to reach an agreement with the military on the realignment plan and a related land exchange “within the next six months,” said Smith.

Four Arlington transportation projects were approved by NVTA this summer. Other transportation funding requests made by the County Board on Tuesday include: