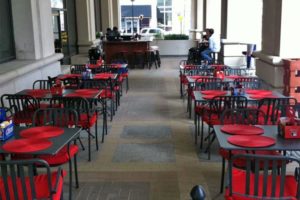 A county staff proposal that could have crippled Courthouse bar and restaurant Velocity 5 has been scaled back after some County Board intervention.

In December, county staff recommended that Velocity 5’s popular outdoor patio be forced to stop serving food and drink at 11:00 p.m., in response to “community concerns about noise.” That’s despite a report from the police department saying that noise complaints were down by 50 percent.

The owners of Velocity 5’s Courthouse location, which changed hands in early 2013, rallied supporters via social media after learning of the staff recommendation. Dozens showed up at the Dec. 17 County Board meeting where the proposal — part of the renewal of Velocity 5’s live entertainment permit — was under consideration. The Board ended up deferring the proposal until January to allow staff more time to work with the owners.

Co-owner Matt Rofougaran says the early serving cut-off could have put the restaurant, which employs about 30 people, out of business. Some 30-40 percent of Velocity 5’s revenue comes from the patio, he said.

“I would be shocked if we would be able to stay open… if they close that patio,” Rofougaran told ARLnow.com in December. “It’s not fair, they’re trying to punish us for something that we improved on.”

Rofougaran contended that the majority of the noise complaints came from one or two residents of the next-door Archstone Courthouse Plaza apartments.

“Most of the complaints were from one guy… who had problems with the previous owner,” he said. “A lot of customers live in the building and say they don’t hear anything from their apartments.”

After making their case, Rofougaran said the Board was “actually helping us” sort through the issues.

As a result, at its upcoming meeting on Saturday, the Board is slated to consider a new live entertainment permit renewal that does not place restrictions on Velocity 5’s outdoor serving hours. The patio will still be allowed to stay open and serve customers until 1:30 a.m. Friday and Saturday and until midnight Sunday through Thursday.

Velocity 5 will, however, face some new restrictions. It will need to hire a security guard to monitor the patio after 8:00 p.m. when it’s at capacity. Also, it will need to turn off any outdoor music at 10:00 p.m. and will have to turn off outdoor televisions at 11:00 p.m. Friday and Saturday, 10:00 p.m. Sunday through Thursday.

“Staff is not recommending that the outdoor seating area be closed at any specific time; instead, it is expected that the additional security presence outdoors will mitigate the impacts of the use,” the new county staff report. It adds that complaints about noise have been made by “a few residents” of the apartment building.

“The staff has agreed to work with us and has recommended changes to the entertainment license that we will gladly abide by,” Rofougaran said via email Tuesday. “We thank everyone for all their help, including the staff and the community that helped support us.”

Velocity 5 is still slated to be rebranded as “Social Haus,” as earlier reported. Rofougaran says they’re planning close the restaurant in early February for renovations. It’s expected to reopen as Social Haus in early March.