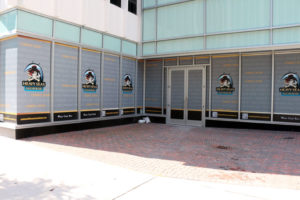 Heavy Seas Alehouse, which has been under construction at 1501 Wilson Blvd for months, is targeting next month for its opening.

“We are aiming for somewhere around the week of Feb. 17,” The Alehouse said last week. “No official date yet, though.”

The alehouse, affiliated with the Baltimore brewery of the same name, was originally targeting a December opening date. In recent months, it has been hiring staff and, last Friday, announced its Chef de Cuisine would be Marc Kennedy, former executive chef at McCormick & Schmick’s in Crystal City.

The 6,000-square-foot alehouse will be at the corner of N. Oak Street at 18th Street in Rosslyn. The bar will have 15 taps rotating primarily with Heavy Seas beers. It will open daily for lunch at 11:00 a.m. and will be able to fill growlers for customers.