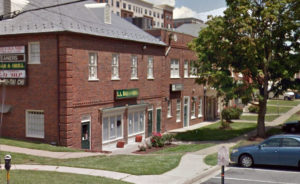 A combination hookah lounge and smoothie bar is apparently coming to 2526 Columbia Pike.

The Twitter account @alongthepike first reported the news, then wondered aloud about the combination of business lines. “Really? Those go together?” @alongthepike tweeted.

Building permit applications show that a business tentatively called “Al-Huda Hookah & Smoothie Bar” is seeking permission to construct a new interior, with a section for hookah smokers and another for smoothie drinkers. The business will replace the former White Birch Traditional Martial Arts kung fu, tai chi and kettlebell gym, located in the back of the small brick-construction strip mall on the 2500 block of Columbia Pike.

Read more →
More Stories
Arlington Pet of the Week: BoNOVA Legal Beat: Can I Be Fired for a Drunk Driving Arrest?