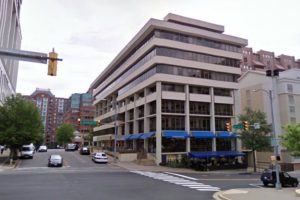 Construction of a new homeless shelter in Courthouse is expected to cost more than $5 million.

Arlington County received two bids on the construction of a new “Homeless Services Center” at 2020 14th Street N., across from Arlington police headquarters. KBE Building Corporation bid $5.7 million and Miller Brothers Inc. bid $5.2 million for the project, which will involve interior alterations on two floors of the county-owned office building and the enclosure of an open parking area on the ground floor. The figures do not include project contingencies and some material costs.

“The total amount is within budget,” Arlington County spokeswoman Mary Curtius told ARLnow.com on Monday. The Arlington County Board is expected to award a construction contract at its meeting later this month.

The Homeless Services Center will be a year-round facility, replacing the county’s aging, part-time Emergency Winter Shelter, located two blocks away. The total cost of the project — including last year’s purchase of the building, tenant relocations and the two-floor build-out — is projected at just over $38 million. The building purchase alone cost the county $27.1 million.

Other floors of the building are expected to eventually be used for county offices, displacing the private tenants there now. That may happen when the county’s below-market lease on office space at Vornado-owned Courthouse Plaza (2100 Clarendon Blvd) expires, insiders tell ARLnow.com.

A timeframe for construction will not be available until the county staff report is issued on Feb. 14, Curtius said. Last year officials were hoping to have the new homeless shelter built and ready to open by fall 2014.

The decision to build the new homeless shelter attracted considerable controversy last year as nearby condo residents told County Board members they were fearful for their safety and property values. As a compromise measure, the Board agreed to require a security guard at the center from 4:00 p.m. to midnight..