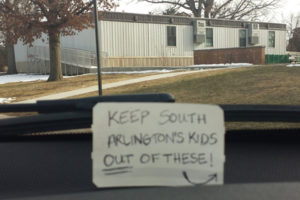 More than 500 parents and residents have signed a petition asking the School Board to hold to its plans of building a new elementary school in South Arlington.

School Board Chair Abby Raphael sent a letter to community members last month notifying them that the Board was considering diverting $4.5 million in design funds — slated for a new elementary school next to Kenmore Middle School in Glencarlyn — to relieving middle school overcrowding in North Arlington.

The elementary school was originally supposed to open in Glencarlyn in 2017. The plans are not the only changes Arlington Public Schools facilities could be due for when the Capital Improvements Plan for 2015-2024 is adopted in June — a move or expansion for H-B Woodlawn is also on the table.

The list of options for the CIP won’t be narrowed until April or May after a long community involvement period, according to APS.

The $4.5 million was part of a bond Arlington voters approved by referendum in 2012. Glencarlyn neighbors protested the location of the school at the time, claiming the added traffic would be a hazard for the neighborhood. Raphael references their objections in her letter as a reason to reconsider the school.

Below is the Change.org petition, which has garnered 555 signatures as of 3:30 p.m. Thursday:

… we ask that you remain true to the original intention of the 2012 School Bond by moving forward with the design (and later construction) of a new South Arlington elementary school.

As busy residents of Arlington County and/or parents of young APS students, we may not have the ability to attend every… CIP stakeholder meeting — e.g. the Community Forum on Feb. 5th at Washington-Lee High School; however, we remain concerned citizens who want to ensure that our voices are heard on this issue. We voted for the 2012 School Bond based on a specific plan laid-out in the bond’s FAQ sheet (http://www.apsva.us/CIP), and we want to ensure that APS and its School Board follow-through on their original intention to alleviate imminent elementary school overcrowding south of Arlington Blvd., rather than re-directing those bond funds toward the design (and later construction) of a new North Arlington middle school.