Morning rush hour traffic on Columbia Pike has gone from bad to worse thanks to a new traffic pattern at the Washington Boulevard interchange, drivers tell us.

Two weeks ago VDOT, as part of its Route 27/244 interchange project, altered the traffic pattern for vehicles heading eastbound on Columbia Pike. Drivers heading toward northbound I-395 now have to turn left at the traffic signal on S. Quinn Street, whereas before northbound and southbound traffic could both take the right-hand ramp that also leads to southbound I-395. 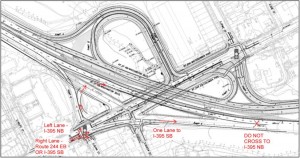 Last week, one reader told us the new traffic pattern was a “disaster,” with eastbound Pike traffic backed up to S. Courthouse Road at 7:45 a.m. Today (Wednesday), another reader said that traffic was backed up to S. Walter Reed Drive at 8:15 a.m.

“That is absolutely ridiculous,” said Thierry Driscoll, a Pike commuter who now uses S. Courthouse Road as a shortcut to Washington Boulevard. “There are cars backed up in the left lane of Columbia Pike waiting to take a left onto the Washington Blvd access ramp, but cannot because the access ramp is full.”

“There is no excuse for such a boneheaded design,” he continued. “This new pattern has inconvenienced a lot of people.” 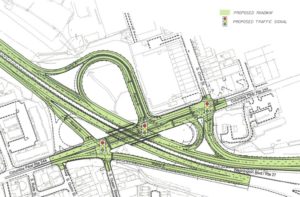 Driscoll said it takes 10-15 minutes to get from the start of the backups to Washington Blvd.

VDOT spokeswoman Jennifer McCord says the current traffic pattern is temporary and will be in place for another 8-12 months while new ramps are built.

“We realize it’s slower for drivers trying to get to I-395N since they have to yield to the oncoming traffic,” she said. “Our folks… added as much time as possible to the left-turn signal” to alleviate some of the traffic.

“No more significant changes” are planned, said McCord. She advised using S. Glebe Road as a possible alternate route to I-395 for those heading from western portions of Columbia Pike.