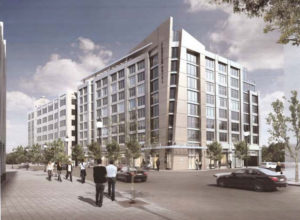 Construction is expected to begin this summer on a 161-room hotel at the corner of Wilson Blvd and N. Adams Street after the Arlington County Board approved its site plan on Saturday.

The hotel construction will displace Wilson Tavern and Northern Virginia Mixed Martial Arts on the 2400 block of Wilson Blvd.

The construction will also include four single-family homes behind the hotel on 16th Street N., acting as a buffer between the new building and Lyon Village’s existing single-family homes. The houses standing now, which are occupied by renters, according to the county, will be torn down and replaced.

The motion required amending the property’s General Land Use Plan, a process that began in 2009 before Wilson Tavern had even opened. Despite the lengthy process, County Board Chair Jay Fisette hailed the way the proposal made its way through the county government.

“What’s nice about today is we had three speakers, very little outstanding to talk about,” he said during the meeting. “That’s because the commissions did a great job, the community and neighbors did a great job in reaching an attractive end point. I hear it’s called the Dream Hotel. It’s been a dream process here in the end.”

The eight-story building will also include a 1,300-square-foot restaurant space, separate from the bar and cafe that will be in the hotel lobby. There will be 80 dedicated parking spaces and the building is expected to be LEED Gold-certified, which qualified the developer, Schupp Companies, for bonus density.

Of the three speakers, two were representatives of the Lyon Village and Clarendon-Courthouse Civic Associations, who endorsed the project. The third was Jim Hurysz, who criticized the Board for what he said was an unacceptably low contribution to the Affordable Housing Investment Fund: $586,000. The developer has agreed to contribute about $1.5 million to the county to replace the Courthouse Metro Station elevator with two high-speed units, County Manager Barbara Donnellan said.

“While some of us would like a larger amount [for affordable housing], a lot of times there are other community benefits that must be taken into consideration,” Board member Walter Tejada said. “We also have an amount that’s going to affordable housing. Would I want it to be more? Absolutely, but in other days, it would have been none.”

The Metro elevator contribution, along with a previous contribution from the approved Clean Technology Center, will allow elevator construction to begin before 2020, Donnellan said, and funds at least 50 percent of the costs. It was originally planned for after 2020 in the 2013-2022 Capital Improvements Project.

Schupp Companies is also providing funds for constructing a bus shelter on Wilson Blvd and improving the streetscape in the area.