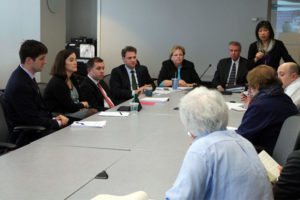 (Updated at 5:45 p.m.) An independent consultant hired by Arlington County has found that the planned Columbia Pike streetcar could generate between $2.2-3 billion more than an enhanced bus system for the corridor over the next 30 years.

The study, conducted by HR&A Advisors, estimates that the streetcar will generate between $3.2-4.4 billion of net impact to the area in the form of increased property values, density and retail opportunities, among other factors. In addition, the streetcar is estimated to bring in up to $620 million in additional local tax revenues between Arlington and Fairfax counties over 30 years, plus 4,600 more jobs within 10 years after construction is completed.

“[This study] is a great validation for what we’re about to do,” County Manager Barbara Donnellan said at a press conference this afternoon announcing the results of the study.

The study, which was commissioned last year as an update to the streetcar’s projected return on investment, compared the streetcar to an enhanced bus system. HR&A President Eric Rothman said the study did not factor in bus rapid transit because a dedicated bus lane is “not feasible” for the Pike.

HR&A used four case studies for its projections for Columbia Pike, as well as interviews with Arlington developers and retailers — some of whom are already invested along the Pike — to formulate its predictions.

“Previous studies that have been done by and large found positive impacts across the board for streetcar implementation in the country the last 15 years,” Rothman said.

Kyle Vangel, who was the study’s project manager for HR&A, said the developers he interviewed the project looked more favorably at the Columbia Pike streetcar if it connected with the Crystal City streetcar line, which Transportation Director Dennis Leach said will have its environmental impact study completed this fall. He also said that, while the tracks and wires might not be aesthetically pleasing, rail engenders confidence in long-term investment.

“In many people’s perceptions,” Vangel said, “the streetcar has more of a feel of permanence than an enhanced bus.”

From one end of the corridor to the other, Vangel said the streetcar would only take one fewer minute than an enhanced bus system, but it would hold 61 more riders per trip, be a one-seat ride to Crystal City and would be under capacity by 2035, whereas enhanced bus would be over capacity in 30 years. 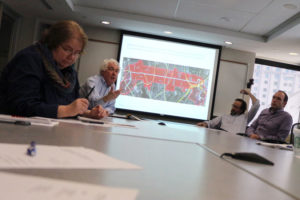 In response, the anti-streetcar group Arlingtonians for Sensible Transit said the study was not a good use of taxpayer money because it was not conducted truly independently.

“Having previously spent many millions of taxpayer dollars on studies trying to justify the choice of the Columbia Pike streetcar”, said Peter Rousselot, ARLnow.com columnist and a leader for Arlingtonians for Sensible Transit, in a press release, “there was no legitimate reason to spend more taxpayer money on another ‘study’ unless the consultant had been given the independence to reach the conclusion that the streetcar was the wrong transit choice on Columbia Pike.”

Rousselot’s main point of contention was over the contract HR&A signed with the county, which stipulated the county must approve the study at certain milestones before it could be presented. Rothman said those milestones were simply submitted to the county so the company could receive payment, not edited for review.

“The county provided no substantive input for the numbers in the report,” Rothman said.

Frequent County Board critic Jim Hurysz, attending the meeting for his blog, Arlington Yupette, railed against the consultants and county staff members giving the presentation, accusing them of cherry-picking examples of streetcars and buses to serve the county’s agenda. Hurysz fired off questions and opinions alongside reporters from ARLnow.com, the Washington Post and the Washington Business Journal, before being shouted down by a county communications staffer, as she was attempting to end the meeting on schedule.