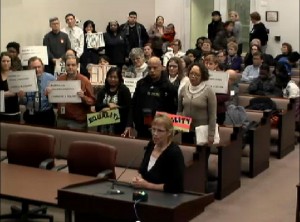 The Arlington County Board held its annual public budget hearing Tuesday night, and there was no shortage of requests for more spending.

During the hearing members of the community typically lobby the Board to direct budget funds to particular areas of need or to specific nonprofit organizations. Only a couple asked the Board to cut spending.

Forty-five speakers came to the podium Tuesday night, and even more packed the County Board meeting room in support of their causes.

Members of the Arlington General Employees Association (AGENA) represented a significant chunk of the audience, with speakers rallying against pay raises that they feel unfairly favor management over the labor force.

“A team works together to provide great service. Each member brings something unique which makes the team work well,” said Jewyll Davis, speaking on behalf of AGENA. Davis cited County Manager Barbara Donnellan’s budget that calls for an avergae general management pay-for-performance raise of 3.2 percent, but an average increase of 2.3 percent for general employees. “Good team members should not receive a raise less than their managers’.”

Dozens of speakers requested additional — or continued — funding for nonprofits like Arlington Free Clinic; Bu-Gata, a tenant advocacy group; and the new nonprofit Arlington Neighborhood Villages, which supports those aging in place in Arlington.

There were at least five speakers who mentioned a need for an increased contribution to mental health services, from $75,000 for peer counselors to support for replacing state and federal funding that is set to run out.

“The preservation of critical safety net services to protect our most vulnerable residents should take highest priority,” Jim Mack, chair of the county’s Community Services Board, said.

“I’m here to ask that [the Arlington Partnership for Affordable Housing] and other organizations like APAH will be able to have a budget to be able to fund affordable housing in Arlington for many years to come,” one speaker said. “I know that that the request is for $5 million more in the budget, but it’s worth it.”

Donnellan’s proposed budget calls for a general fund of $1.1 billion, which includes no tax rate increase but an average yearly cost increase of $381 per family due to a rise in real estate assessments and other fees. Only three speakers at the meeting spoke out against spending more.

“Needs not wants must drive county government and the county board. But that’s not what’s occurring in Arlington County,” said Jim Hurysz, a frequent County Board critic. He said he’s attended several budget work sessions so far, and “no one, with the exception of [Board member Libby] Garvey, expressed any concern for Arlington’s taxpayers, and I haven’t heard any concern expressed here tonight.”

The County Board will be holding another public hearing tomorrow night at 7:00 p.m. to address the tax rate, which Donnellan has proposed holding steady at $1.006 per $100 in assessed value tax rate.