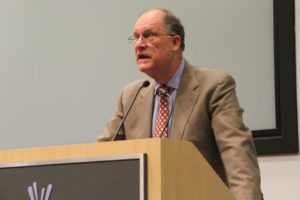 Independent Arlington County Board candidate Stephen W.C. Holbrook doesn’t like a plan to use public land for affordable housing, and made his opinions known in a strongly-worded email to Cardinal Timothy Dolan, the Archbishop of New York.

Holbrook wrote the email, a copy of which was also sent to ARLnow.com, following his participation last week in a forum for County Board candidates organized by the faith-based social justice group Virginians Organized for Interfaith Community Engagement (VOICE).

The forum, held Thursday at St. John’s Baptist Church on Columbia Pike, was intended “to call on the four candidates in the April 8 special election for County Board to commit to a bold a bold new plan for using public land to develop 1,000-1,500 units of affordable housing on a 3-5-year timetable for families earning $30,000-$50,000 a year,” according to VOICE, which collected more than 10,000 petition signatures for the plan.

In his letter to Dolan, Holbrook, a retired FBI agent, let it be known that he thought the plan was not in keeping with church teachings.

“GOD’S house is a place to talk to your GOD and not a place to gather people to form a plan to lay out how you will steal from other people,” Holbrook wrote. “I am a Catholic and that meeting in that church was the first time I ever went into a church and came out feeling dirty and that there was evil in that church. I thought that God was going to send down a lighting bolt unto those church leaders and their people and I didn’t want to be around them.”

“It took me two days and several baths to get the smell of greed and sin off of me but the other people there will go to hell for what they do and their church leaders are to blame,” Holbrook continued.

Asked by ARLnow.com to clarify his remarks, Holbrook suggested that those who vote for his three opponents — who support the creation of additional affordable housing — will be guity of theft by association.

“The voters that will go to HELL are the ones that trade their vote for stolen assets and those assets did belong to a person and or group of people that collectively did not want those assets given away,” he said via email. “GOD gave us all the TEN COMMANDMENTS. One of those Commandments was ‘Thou shall not steal.’ When you take assets for example from a group of people that did not want to give those assets away… [those] who gave their votes for them are just as guilty for receiving those stolen assets as the person that stole those assets.”

In his letter to Dolan, Holbrook requests that Catholic churches in Arlington read to its congregants and employees a speech he had prepared for the VOICE event but was not given the opportunity to read. That speech also took aim at the Arlington Education Association — Holbrook blames the teachers group for the county’s increased spending on public schools, which he opposes.

“The teachers’ union has already bitten the forbidden apple by showing their willingness to take unearned taxpayers’ assets for their vote for the Democratic candidate here and they will burn in Hell for their sinful deeds,” he writes.

The full prepared speech, after the jump.

GOD gave us all Ten Commandments. One of those commandments was “Thou shalt not steal.”

We all know what we are here for tonight and that is to select the best candidate for the empty Arlington County Board Seat. However, some of you here, are here only to accept something from one of the candidates here so you can meet your GROUP’S goal of building more affordable housing for people you think deserve them. In essence these same people are looking for the thirty pieces of silver for their vote come April 8, 2014.

My three opponents here want you to vote for them and they are willing to steal the taxpayers’ land and tax dollars and give them to you for your vote. I am not willing to commit that sin. Even though you don’t directly steal the taxpayers’ assets you will receive that stolen asset which makes you just as guilty in GOD’s eyes as if you stole them without help.

Arlington County’s leaders and my three opponents here are, or want to lead us all down the path that Detroit, Michigan has taken and that is into bankruptcy by having you commit a sin against your GOD.

If you vote for any of my three opponents just remember when you see you’re GOD you will still have those thirty pieces of silver tired around your neck and he will know your wrongs.

The teachers’ union has already bitten the forbidden apple by showing their willingness to take unearned taxpayers’ assets for their vote for the Democratic candidate here and they will burn in Hell for their sinful deeds.

We all have dreams in our life. But who must pay for those dreams, you or other people. Which unfilled dreams must go by the wayside so yours can be fulfilled, yours or others? We had a Revolutionary War in this country where many of our citizens died fighting for your individual freedoms guaranteed to you in our Constitution. In our U. S. Constitution all of us are guaranteed only Life, Liberty and the Pursuit of Happiness. Everything else we must earn. Our forefathers didn’t form a government to do charity work but it did form in our U. S. IRS Tax Code charities to do the LORD’s work. That is what a free county offers you no more or no less. If you all want a different kind of government that takes care of you and the people you think need help in their life’s but takes away your individual rights granted to you in our Constitution than you must chose a socialist form of government and move to one of those counties. Once you take away the incentive to work and be rewarded for your work than you don’t have true freedom of self.

It is important that you vote with your mind, heart and your GOD and not with your organization, political group and or unions. You all are the children of GOD and I hope you act accordingly. MAY GOD bless you all?

On the April 8, 2014 election date only about 10 % of Arlington REGESTERED VOTERS will vote for the other three candidates up here with me. The other 90 % would never vote for them or their ideas on how to ruin Arlington County with unjustified tax rates and unethical spending.