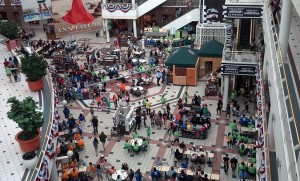 Arlington’s retail sales dropped at the end of 2013 while other indicators of a strong economy — like housing prices and unemployment — improved over the same time period.

In the fourth quarter of 2013, Arlington reported about $813 million in taxable retail sales in its March economic indicators study today. Over the same period in 2013, Arlington had about $786 million, a drop of 3.3 percent. The change can’t be attributed to the unusually snowy winter, either: nearly all of the snow this winter fell in the first quarter of 2014, after these numbers were recorded.

While the retail industry — which includes everything from restaurants to grocery stores to stands in the Fashion Centre at Pentagon City — lost $27 million in sales year-over-year, Arlington’s workforce grew 1.4 percent while its unemployment rate dropped from 3.9 percent in January 2013 to 3.3 percent in January.

In addition, housing prices were up across the board this February compared to last year, with a 2.2 percent bump in single family detached house prices, 3.7 percent for single family attached (like townhouses and duplexes) and a 4.7 percent jump in condominium prices, from $410,339 to $430,115.

“It’s hard to really discern what the drop means,” Asadoorian told ARLnow.com. “The only thing I could say is there hasn’t been that much new retail space delivered in Arlington, which means there hasn’t been a whole influx of new tenants, which means the mix in Arlington is stable. If it’s stable, is it still competitive with other jurisdictions that may be growing?”

Asadoorian referred to Tysons Corner and Georgetown as two areas whose growing retail options could be poaching customers from Arlington’s shops. However, several buildings under construction in Ballston and Rosslyn figure to bump the retail number back up in the coming years, he said.

While those buildings may help the retail market, they may not do wonders for the office vacancy rate in Arlington, which ballooned to 19.9 percent over the past year, a 3.7 percent jump over 2012. A significant chunk of that is from the 35-story 1812 N. Moore Street building in Rosslyn which is still looking for its first tenants.

The office vacancy rate in Rosslyn grew 8.4 percent year-over-year and sits at 25.2 percent, now the highest area in the county. Crystal City, still smarting from BRAC closures, is the second-most vacant neighborhood at 24.7 percent. Only the Clarendon-Courthouse corridor gained more office tenants than it lost last year, with its vacancy rate falling from 11.2 to 9.0 percent.