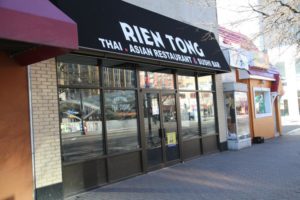 ARLnow.com first reported in Februrary that numerous businesses in the Clarendon area — mostly bars and restaurants — saw their real estate assessments skyrocket this year, in one case nearly 200 percent. A week later, the county announced that it would review “all commercial real property assessments with a 50 percent or greater increase from calendar year 2013.”

That review is continuing, with Donnellan telling the Board that she had “no projection as to when it would be completed.” In an earlier interview with ARLnow.com, Rick Melman, Arlington’s director of real estate assessment, said he expected the review to wrap up by the end of May.

In all, 64 commercial properties had 50 percent or higher assessment increases and are being reviewed, Melman said. Responding to a request from ARLnow.com, the county released a list of those properties — albeit in the form of Real Property Codes, not addresses. Those codes can be searched here.

For some of the properties on the list, the big jump in assessments can be explained by building projects or development plans that drove up the value. Others remain unexplained — for instance, Rien Tong Restaurant’s nearly 200 percent increase, when neighboring restaurant Kabob Bazaar only increased 32 percent. Or Revolution Cycles’ 64 percent increase, when the Whole Foods across the street saw no increase.

Outside of Clarendon, some properties on the list stood out.

“The assessment office is right now in the process of looking through these 64 properties,” said Melman. “It’s quite a lot to look at. At this early stage it looks that about half of them are explained by new construction, site plans, things like that. Examiners are re-examining the other half. There’s no real trend, they’re all over the county.”

Melman said the real estate assessment office, on balance, had a “pretty low appeal rate” this year. Still, he encouraged anyone who feels their property’s assessment was too high to contact the office and/or file an appeal. Today (Tuesday) is the final day to appeal to Arlington’s Board of Equalization.

“There have been some human errors on our part… and that’s what the appeals process is for,” Melman said. “We’d be glad to talk to any property owner if they have questions or concerns. Our goal is to be fair and equitable to citizen.”