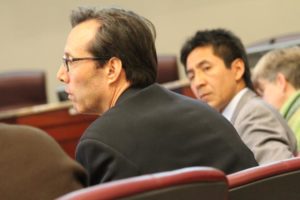 (Updated at 10:10 a.m.) Arlington’s property tax rate will drop by a one cent in the next fiscal year.

That penny corresponds to about $6.6 million in reduced revenue for the county. However, the tax and fee burden on the average Arlington taxpayer will still rise about 4.6 percent, thanks to an increase in property assessments and increases in solid waste and water-sewer fees.

The county plans to use the additional tax revenue on a variety of projects, but much of it will go to Arlington Public Schools and to a “modest” 1 percent cost-of-living adjustment and $500 bonus for county employees.

“The Board’s action provides $432.2 million to the Schools, an increase in base funding of $19.6 million, or 4.7% more than FY 2014, the county said in a press release. “With this budget, Arlington’s support of our students now exceeds $19,000 per pupil — more than any other school district in the region.”

The Board also funded three new School Resource Officers and $8 million for school construction. Other non-school projects the Board committed to funding yesterday include $200,000 in tourism marketing, $1.6 million for the county’s high-speed fiber optic network for businesses, $52,000 for a new sexual assault hotline, $72,606 for a mental health coordinator, $700,000 for costs associated with the opening of the new year-round homeless shelter early next year, and $300,000 for plowing snow from bike trails.

“The Board had to make some tough decisions,” County Board Chair Jay Fisette said in a statement. “In order to give some break to homeowners who have seen their assessments rise, we limited the growth of the County budget, launched no new major initiatives and focused on funding schools and maintaining our core services and existing infrastructure.”

The $200,00 for tourism came at the request of the county’s hotel businesses, which were doubly hurt by a quarter-cent drop in the Transient Occupancy Tax and the lack of business in the fall during the government shutdown.

“I’ve got to thank you for this,” County Manager Barbara Donnellan told the Board. “With the vacancies in the fall, I met with people in the hospitality industry and they were telling me, ‘It’s terrible, we’re going to have to lay people off.'”

At the end of the meeting, new Board member John Vihstadt made a motion to halt all funding that would directly or indirectly go to funding the planned streetcar network along Columbia Pike and in Crystal City for 2014 and 2015. The measure failed 2-3, with Vihstadt joined by Libby Garvey in voting for the motion.

The Arlington County Board today directed the County Manager to reduce the real estate tax rate by one cent in the Fiscal Year 2015 Budget. The Board’s action came during the mark-up for the budget, which the Board is set to adopt during its April 22 meeting.

“The Board had to make some tough decisions,” said Arlington County Board Chair Jay Fisette. “In order to give some break to homeowners who have seen their assessments rise, we limited the growth of the County budget, launched no new major initiatives and focused on funding schools and maintaining our core services and existing infrastructure.”

The budget mark-up includes a real estate tax rate of $0.996 per $100 of assessed value, a one-cent decrease from the $1.006 rate in Calendar Year 2013 (including the sanitary district tax). This represents a $6.6 million reduction from the budget proposed by the County Manager.

The Board made cuts, reallocations and minor additions to the County Manager’s Proposed FY2015 Budget, after hearing from the public and vigorously questioning staff during numerous work sessions with each County department.

The Board balanced the budget by limiting the growth of County expenses, while increasing the amount and portion of local funds going to the Schools. Based on the revised real estate tax rate, the County’s Budget will increase 3% from the FY 2014 Adopted Budget while School funding will increase 4.7%.

The Board’s action means the overall tax and fee burden for the average Arlington homeowner will be 4.6% higher than in 2014, or about $27 a month, a decrease from the Manager’s proposed budget. It also ensures that Arlington’s real estate tax rate remains the lowest in the region.

This reflects the 5.3% increase in the average residential property assessment and a 3.4% increase in the water-sewer rate. The household solid waste rate also will increase by 4%. Part of that increase will be used to fund year-round collection of yard waste – a service provided by nearly all of Arlington’s neighboring jurisdictions.

The Board maintained the County’s commitment to keeping Arlington Public Schools among the nation’s finest. With this budget, Arlington’s support of our students now exceeds $19,000 per pupil – more than any other school district in the region. The Board supported a 4.7% increase in APS base funding, additional funding of $8 million for school construction or other one-time expenses, and added funds for another school clinic aide and three new School Resource Officers.

The Board did not include funding for a merit step increase for staff. However, recognizing that the County workforce has had to do more with less in recent years due to constrained budgets, the Board’s plan provides County employees with a 1% cost of living adjustment and provides a $500 bonus to employees in FY 2015. The Board also added two holidays for employees following Christmas and New Year’s as both holidays fall on a Thursday.

Formal adoption of the budget is scheduled to take place April 22. For more information, visit the FY 2015 budget page on the County website.