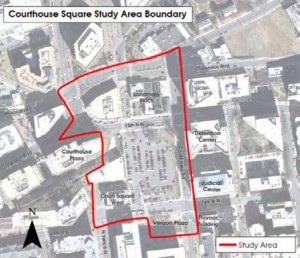 (Updated at 1:55 p.m.) Arlington County surveyed more than 250 residents, workers and visitors to Courthouse Square to assess public opinion of the area’s future.

The survey was conducted as part of the county’s “Envision Courthouse Square” initiative, which is trying to get the public involved in the process of planning the future development of the 9-acre area surrounding the county’s large surface parking lot.

That lot in particular was the subject of many survey respondent’s suggestions, who desire to see it become an underground parking lot with a different use for the surface area up top.

“I live in the neighborhood, so for me the parking is a waste,” one respondent said. “However I recognize the need for parking near the courthouse and government buildings to serve other residents of Arlington. I would think that an underground parking structure with a public space on top would be the best way to balance these needs.”

“Please underground the parking,” another said. “The surface parking detracts from the neighborhood’s streetscape. We should create a walkable environment that encourages visitors to utilize Arlington’s multimodal options.” 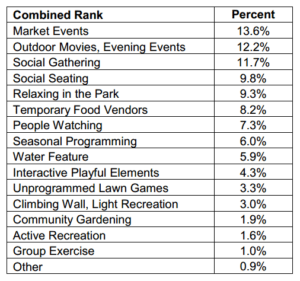 More than 13 percent of respondents listed “market events” as their preferred future use of open space in Courthouse Square, followed by 12.2 percent in favor of outdoor movies and evening events. Social gathering and social seating received 11.7 and 9.8 percent of the vote, respectively.

When asked if public events, celebrations and demonstrations should be encouraged in Courthouse Square, 73.1 percent of those asked answered, “yes,” but some said they worried the events would benefit only those from other areas.

“Courthouse Square should be a place for those who live there or nearby to enjoy the open space,” one response said, “not an area for out of towners or others to use to hold political events.”

Of the “yes” answers, many cited Courthouse’s civic identity as a reason to encourage First Amendment expression in the open spaces.

“It should be celebrated as THE civic space in Arlington,” one answer said. Another respondent said only, “Because America, that’s why.”

“Courthouse does not currently have much of neighborhood feel,” said one of the “neighborhood” respondents. “It is nice to feel some smaller community in a large city. New York City neighborhoods have this and it makes them unique. It also draws people from other places to experience their unique aspects.”

“We all have plenty of regional attractions,” said a respondent who thought Courthouse should be designed for all of Arlington. “[We] need to develop sense of place — Arlington specific, beyond just being across river from D.C.”

Said another: “Arlington needs a town center. An identity. A place people can say ‘I’ll meet you on the town square.’ Arlington lacks that now — and I think that harms our identity and cohesiveness.”