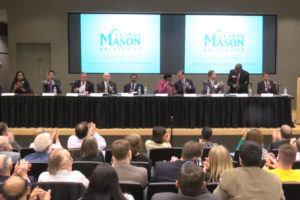 The candidates are vying to fill the retiring Rep. Jim Moran’s seat in Congress. Virginia’s Eighth District is considered a deeply blue, safe Democratic seat — thus its attractiveness to a field of candidates trying to pounce on the rare political opportunity.

Moran, who’s been the 8th District’s representative since 1991, started the night with 10 minutes of remarks, touching on his service and the benefits of representing Arlington, Alexandria, Falls Church and parts of Fairfax County. He said he won’t be endorsing any of the Democrats running in the June 10 primary.

“It’s a great district, and it’s kind of a microcosm of this country,” he said. “In this district, you have far more latitude than any other district in the country, as far as I’m aware of, because the constituency in this district is well-educated, wants to understand things, is extraordinarily open-minded if you want to make a case. I’ve found that I have far more latitude than many of my colleagues.”

The candidates were asked what their first priority would be in Congress, and what their top foreign policy concern is. Many candidates touched on consensus topics among Democrats — women’s reproductive rights, climate change and economic development — while they tried to distinguish themselves from the other candidates. 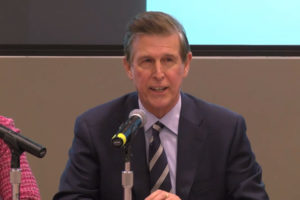 “We’re all Democrats here and I respect my colleagues greatly, but we all bring different things to this race,” Beyer, who is the frontrunner in polling and fundraising, said in his opening statement. “As a businessman, lieutenant governor and ambassador, I have a proven record, the ideas and the energy to hit the ground running.”

“There are some people on this dais who believe the Affordable Care Act has flaws,” Hope said. “I don’t believe the Affordable Care Act has flaws, except one: it did not expand coverage to every single American. Even if Virginia and other states expand Medicaid to the poorest people in their states, we will still have 20 million Americans who do not have health insurance.”

Euille, when discussing foreign policy, touched on his foreign travels and the visitors who have come to Alexandria to ask him about politics. He said his guiding principle in foreign policy is seeking world peace.

“I will never put out troops in combat,” he said. “I will never support a war, because I think it’s the wrong thing to be doing. We need to make certain that the only time we use our troops to fight would be in defense of our own borders.”

Levine, a liberal talk radio host who reminded the capacity crowd of his penchant for pulling out his pocket U.S. Constitution, distanced himself from Euille and some of the other candidates on stage by advocating for a more aggressive military stance.

“We are an ally of NATO and countries look to us for support,” Levine said. “And when Russia is busy invading Ukraine, Latvia, Lithuania, Estonia and Poland are nervous, and they look to us for support. A treaty obligation is vitally important, and we should go to war, if we have to, if a NATO country is attacked.” 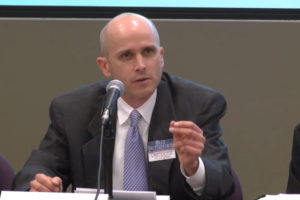 “I think the greatest threat to our national security is something that doesn’t care that we spent three-quarters of a trillion dollars on national defense,” he said. “It doesn’t care about shiny jet fighters or all the drones in the world. That threat is climate change.”

Chatman touted her credentials as a community leader, having served as president of the Northern Virginia Urban League. She talked about reducing the U.S.’s dependency on foreign oil, but pressed largely on her ability to rally troops in her area.

“I think the time is right for a leader who has run effective nonprofits and someone who has put our shared values into action to make this community stronger,” she said. “I’m tough, I’m a fighter, but I’m a coalition builder and a collaborator.”

Herring, the former chair of the Democratic Party of Virginia, said her background and upbringing is what makes her unique among the other nine candidates vying for votes.

“I understand what people are going through because at 16 years old, I was homeless,” she said to open the forum. “That experience has taught me vigilance, grit and determination. But most of all, it has taught me to help those who are struggling… My life experience informs my approach to policy. Living in a shelter prepared me to do what I need to do, and that is to be organized for the future.”

Ebbin, who was the first openly gay person elected to the Virginia General Assembly, said that when he was first elected his sexuality was the only issue people would discuss regarding his candidacy. He lauded how much the state and the region had changed in the decade since.

“Ten years ago when I ran, I wasn’t Adam Ebbin, I was reduced to being the only openly gay candidate,” he said. “But now this isn’t the case. While I would like to think my work alone is responsible for not typecasting me anymore, I know that it’s a tribute to how fast Virginia, and particularly Northern Virginia, has come.”